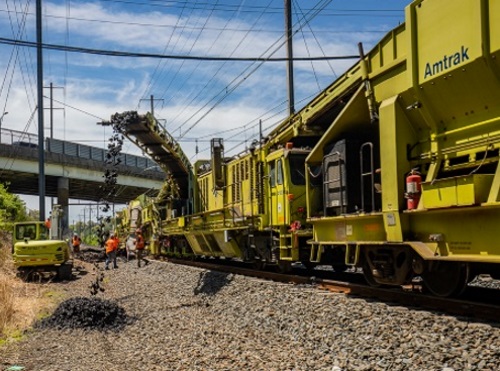 Some $55 million worth of infrastructure improvements to the Amtrak passenger rail corridor linking Washington D.C. and New York are scheduled to occur this summer; part of a larger $130 million effort to improve the railroad’s Northeast Corridor, bring it up to a state of good repair and to enhance the overall customer experience.

“Modernizing and investing in infrastructure is a continuous process on the railroad and we thank our partners for their coordination and flexibility as we advance these important projects,” she noted.

Once complete, those projects will reduce the likelihood of lengthy train delays and significantly improve ride quality for customers, Mason said. Amtrak added that it has adjusted train schedules to account for that work and to avoid conflicts with other commuter agencies, though it expects some “minor delays” to occur.

For each project, Amtrak said its construction crews would be working the night shift, with “heavy production” scheduled for weekend nights to minimize impacts on its rail customers.

This is part of a broader strategic effort by Amtrak to improve passenger service both in the Northeast Corridor and across its national network – an effort that relies on increased involvement from state departments of transportation.

The corridor – which handles more than 800,000 daily passenger trips along the D.C.-Philadelphia-New York City-Boston mega region – should witness travel-time savings valued at nearly $140 million annually for intercity and commuter rail passengers from the C35 plan, the NEC said.

Furthermore, Stephen Gardner – Amtrak president and CEO – stressed the importance of that “state support” in a luncheon keynote address at the American Association of State Highway and Transportation Officials Council on Rail Transportation’s February 2022 legislative meeting in Washington, D.C.

With new funding from the $1.2 trillion Infrastructure Investment and Jobs Act or IIJA enacted in November 2021, he said Amtrak seeks to “create new opportunities” for its state department of transportation partners.

“Now we need to build much greater scale with the investment dollars we’ve been given, addressing decades of underinvestment,” he pointed out. “We also must find the best ways to enable your vision for corridor growth – so we want to be a better partner for planning.”

USDOT Making $1B in Grants Available via RAISE Program