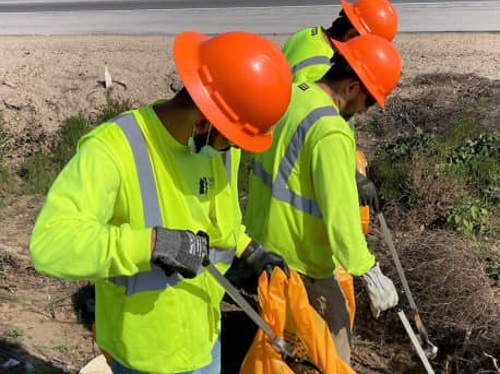 An expanded partnership between the California Department of Transportation and the Butte County Office of Education or BCOE’s “Back 2 Work” program is helping thousands of “underserved” and “often-marginalized” state residents forge a path to what the agency calls “gainful employment.”

BCOE’s Back 2 Work crews support Caltrans in collecting and disposing of litter and debris along the state highway system.

Building on the success of this partnership, Caltrans significantly expanded the program in 2021, signing a $127 million contract with BCOE – funded by Clean California, $1.1 billion, multiyear clean-up effort led by Caltrans to remove trash, create thousands of jobs, and engage communities to transform public space – to hire 82 additional Back 2 Work crews statewide.

Each crew has an estimated 50 participants annually, providing more than 4,000 people with the opportunity to reintegrate back into the workforce.

[Editor’s note: In October 2021, the American Association of State Highway and Transportation Officials noted its support for efforts to invest in job training for formerly incarcerated individuals and “justice involved youth,” while also supporting improvements in public safety by creating pathways to higher-skilled transportation-related jobs for such persons re-entering society.]

The agency added that litter removal by BCOE’s Back 2 Work crews allow Caltrans maintenance crews to concentrate on public safety, maintenance, and other critical efforts that keep people and goods moving safely along the state’s transportation network.

Caltrans said it has worked with BCOE since 2013 to offer skills training, employment opportunities and social services, assisting nearly 10,000 people to overcome poverty and improve their lives.

“Clean California is benefiting communities throughout the state – removing litter and beautifying public spaces – and its transformational impact extends beyond our roadsides,” noted Steven Keck, acting director of Caltrans, in a statement. “The Back 2 Work Program is helping thousands of Californians overcome poverty, learn important skills and rebuild their lives.”

“Back 2 Work provides people in need with the necessary tools and opportunity to succeed in life,” added Keith Lane, senior director of the BCOE Back 2 Work program.

“For those served, being successful can mean so much – reuniting families, breaking systemic cycles, going back to school, and providing for themselves in a way they couldn’t before,” he said. “We are incredibly thankful for the partnership between Back 2 Work and Caltrans, which will benefit every person throughout California in some way.”