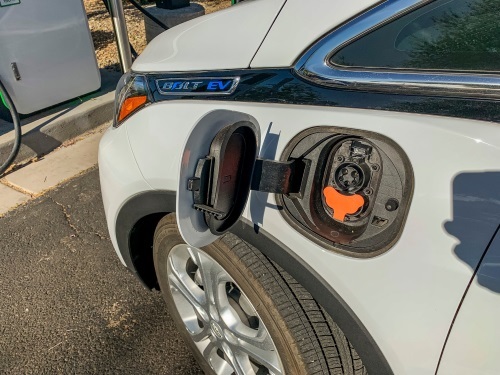 The Federal Highway Administration issued a notice of proposed rulemaking on June 9 to outline minimum standards and requirements for projects funded via the five-year $5 billion National Electric Vehicle Infrastructure or NEVI formula program launched in February.

That rulemaking seeks to support the build out of a national EV charging network of 500,000 EV chargers by 2030, while also ensuring that network is “user-friendly, reliable, and accessible to all Americans” yet also interoperable between different charging companies, with similar payment systems, pricing information, charging speeds, and more.

FHWA said its proposed rule would establish the groundwork for states to build federally funded charging station projects across a national EV charging network, an “important step” towards making electric vehicle charging accessible to all Americans.

No matter what kind of EV a user drives, what state they charge in, or what charging company they plug into, the minimum standards will ensure a unified network of chargers with similar payment systems, pricing information, charging speeds, and more, the agency noted.

The proposed requirements will help states as they develop their EV deployment plans in concert with the Joint Office of Energy and Transportation, established along with the NEVI program by the $1.2 trillion Infrastructure Investment and Jobs Act or IIJA enacted in November 2021.

“To support the transition to electric vehicles, we must build a national charging network that makes finding a charge as easy as filling up at a gas station,” explained U.S. Department of Transportation Secretary Pete Buttigieg in a statement.

“These new ground rules will help create a network of EV chargers across the country that are convenient, affordable, reliable and accessible for all Americans,” he said.

Additionally, the U.S. Department of Energy – in coordination with USDOT through the Joint Office of Energy and Transportation – unveiled the Electric Vehicle Working Group or EVWG to make recommendations regarding the development, adoption, and integration of electric vehicles into America’s transportation and energy systems.

This advisory group will consist of 25 representatives, federal government employees, and special government employees who will compile reports related to the adoption of EVs to help ensure the sustainable integration of electric vehicles into the electric grid, prepare the workforce for more electric vehicles and maintain global competitiveness in electric transportation infrastructure and technology. The DOE expects to publish the member nomination process by next week.

Additionally, FHWA said its proposed rule would require consistency regarding the installation, operation and maintenance of NEVI formula program projects to provide the traveling public with reliable expectations for their charging experience. The proposed rule would further specify the required minimum density of provided chargers, payment methods and requirements for customer support services.

The American Association of State Highway and Transportation Officials is already assisting in this build-out effort via a memorandum of understanding signed in February with the National Association of State Energy Officials, USDOT, and DOE to coordinate nationwide investment in EV charging station infrastructure.

AASHTO also helped establish a free repository of information in March on EVs available to state agencies. Called the “EV States Clearinghouse,” it contains a variety of documents such as sample requests for proposals or RFPs, sample contracts, EV infrastructure siting and assessment tools, plus other resources.

“The focus on electric vehicle charging infrastructure across our national transportation network is a huge step to reducing greenhouse gas emissions, and we applauded the administration’s focus on this issue,” explained Jim Tymon, AASHTO’s executive director. “Many state departments of transportation have found success in their own EV charging infrastructure programs and know first-hand that collaboration between state energy offices and other agencies is instrumental to success.”

Several state DOTs recently achieved milestones in their efforts to establish more EV charging locations along highways in their respective regions. For example, the Oregon Department of Transportation recently celebrated the completion of Phase 1 EV charging upgrades to the West Coast Electric Highway.

Meanwhile, the Connecticut Department of Transportation unveiled Level 3 “fast chargers” the I-95 Southbound service plaza in Madison. Connecticut DOT added that more publicly available fast chargers are expected to go online at service plazas in New Canaan, Greenwich, and Fairfield over the next several weeks.

Concurrently, the Arizona Department of Transportation is currently developing a statewide EV charging network plan it expects to submit to FHWA by August, with further plan refinements to follow.

Moreover, the Louisiana Department of Transportation and Development went a step further by hosting an outdoor EV exposition in April at its headquarters facility in Baton Rouge.

“Overall, we want to convert gas stations into fuel stations where a variety of fuel options, including electric charging, are available,” noted Dr. Shawn Wilson, Louisiana DOTD’s secretary and AASHTO’s 2021-2022 president, at the event.

“In order to become a competitor in green energy, Louisiana must make changes, and this starts with our transportation industry,” he said.

Wilson added that Louisiana DOTD plans to start developing the grant programs now through 2023, soliciting applications as well as monitoring and inspecting charging station installations while identifying and correcting weaknesses in the grant programs for use in future rounds of solicitations and awards.