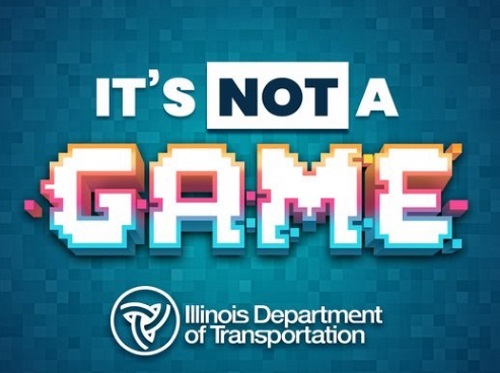 The Illinois Department of Transportation is launching “It’s Not a Game,” a multimedia safety campaign aimed at helping reduce injuries and fatalities associated with motorcycles, bicycles, pedestrians, work zones, as well as boost seatbelt usage plus reduce impaired and distracted driving.

[Above image by the Illinois DOT]

The agency said the “creative material” for this safety campaign relies on the appearance of an old-school video game platform to educate motorists that safety is not a game, comes with real consequences, and everyone is a winner when “wreck-less” driving is the shared goal.

The campaign is running throughout the year on various media, including digital placement in bars, restaurants and gas stations, social media and online platforms, as well as traditional radio and TV channels.

“The rising number of traffic fatalities in Illinois and across the country is deeply concerning, especially since almost all of them are preventable,” explained Illinois DOT Secretary Omer Osman in a statement.

The agency said that, according to provisional data, 1,341 people died on Illinois roads in 2021 – the sixth consecutive year of more than 1,000 traffic fatalities in the state, mirroring a national trend in recent years. So far, in 2022, 448 deaths have occurred on Illinois roads, Illinois DOT added, based on preliminary statistics through May 31.

“‘It’s Not a Game’ is a clever way to reinforce the message that bad choices can cost you your life or someone else’s and the only acceptable number of fatalities is zero,” Osman said.

State departments of transportation across the country are engaging in a variety of similar safety outreach efforts.

In May, the Wisconsin Department of Transportation once again drafted former Green Bay Packer Wide Receiver Donald Driver to play a role in its annual “Click It or Ticket” seat belt safety campaign.

The yearly “Click It or Ticket” campaign is a nationwide law enforcement effort that runs from May 23 through June 5. Law enforcement agencies across Wisconsin will be out on patrol to raise public awareness and encourage seat belt use, the Wisconsin DOT said.

Wisconsin DOT Secretary Craig Thompson noted during a media event at the time that seat belt use has dropped statewide in recent years. In 2021, about 88 percent of drivers and passengers buckled up, according to a yearly agency seat belt survey – down two percentage points from 2019 and lagging behind the national seat belt usage rate of about 90 percent.

“We can put an end to those horrific crashes we see every day on Wisconsin’s highways. We need every person across the state to take responsibility for highway safety,” Thompson said in a statement. “Buckle your seat belt and put your phone down. Every trip, every time. It’s that simple.”

Meanwhile, the Colorado Department of Transportation and Mothers Against Drunk Driving recently announced the winners of their joint 2022 Law Enforcement Champion awards.

Those awards focus on efforts to reduce impaired driving, increase the use of seat belts, and reduce speeding.

“We are ever grateful to the brave men and women in law enforcement who keep our roads and communities safe,” said Darrell Lingk, director of the Highway Safety Office within the Colorado DOT, in a statement.

“We take a holistic approach to safety on our transportation system, which includes recognizing the role of public safety officials in keeping impaired drivers off our road, promoting seat belt use and enforcing speed limits,” Lingk said.

“So many people will never know the debt that they owe to our law enforcement heroes. Every time they stop a drunk or drugged driver, they potentially save a life,” said MADD Colorado State Executive Director Fran Lanzer. “We’re fortunate to have so many dedicated men and women protecting our communities.”