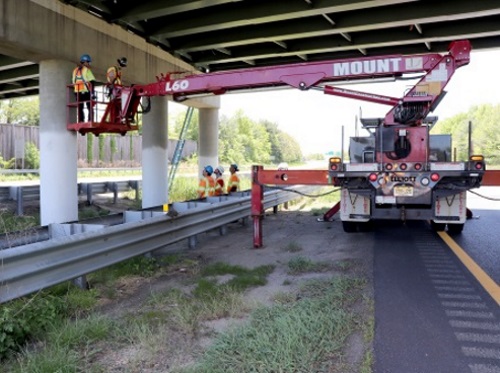 [Above photo by the New Jersey DOT]

“The state of good repair of New Jersey’s transportation infrastructure is a priority,” noted Diane Gutierrez-Scaccetti, New Jersey DOT’s commissioner, in a statement.

“The Local Bridges Fund grant program offers our local governments the ability to use grant funds to invest in bridge projects in their communities,” she added. “This grant program, along with others, continues to demonstrate New Jersey DOT’s commitment to communities throughout New Jersey.”

The Local Bridges Fund receives its fiscal support from the state’s Transportation Trust Fund and provides funding for each of New Jersey’s 21 counties for the improvement of county bridges.

Those annual grants – administered by the agency’s Division of Local Aid and Economic Development and evaluated by its Bureau of Structural Engineering – seek to repair, reconstruct, and replace bridges with the greatest structural deficiencies.

State departments of transportation across the country support a number of locally focused bridge repair programs, with some of those efforts folded into broader statewide transportation project plans.

For example, Governor Mike DeWine (R) recently announced an annual increase in funding allocations for local bridge projects by more than $47 million for the next five years, bringing Ohio’s annual investment in county and municipal bridges to over $112 million per year.

As a result, funding provided by the Ohio Department of Transportation for bridges maintained by the state’s 88 county engineers will increase from $34 million to $74 million annually, with municipal-owned bridge funding increasing from $11 million to $18 million each year.

Meanwhile, the Illinois Department of Transportation is making a number of bridge repairs as part of a $67 million nine-project infrastructure program focused the Decatur area.

The agency expects to complete eight of the nine projects in 2022 or 2023, which includes full bridge replacements as well as bridge deck and joint upgrades, along with other transportation system enhancements.