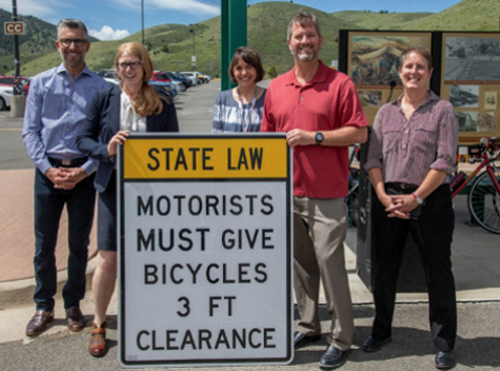 The Colorado Department of Transportation and Bicycle Colorado are teaming up to install new highway signage that reminds motorists to give bicyclists their fair share of the roadway.

Signs reminding drivers of Colorado’s “Three-Foot” law, requiring motorists to give bicyclists at least three feet of space between the widest part of their vehicle and the widest part of the bicycle are being installed along various state highways, either as part of a road construction or sign replacement project.

“These new highway signs are designed to remind drivers that they are legally required to maintain a safe space when passing people biking on a shared roadway,” said Shoshana Lew, executive director of the Colorado DOT, in a statement.

“Studies indicate that regulatory signs for the three-foot law are much more effective at enhancing safety,” she added. “They also help make it clear that drivers bear the responsibility for safely passing a bicyclist.”

Colorado DOT noted that the law permits motorists to cross a double yellow line to pass bicyclists when it does not put oncoming traffic at risk. The agency added that 35 states currently have statues in place requiring at least a three-foot clearance between a motor vehicle and bicyclist.

“Words matter and these signs leave no doubt about what is expected of drivers when passing bicyclists on any roadway: three feet of space, and no less,” Heuven added. “It’s exciting to see Colorado DOT leading on best practices in bicycle safety signage.”

State departments of transportation across the country are engaged in a variety of efforts to improve bicyclist safety.

For example, many state DOTs worked to raise awareness regarding use of the bicycle as a work commute and daily travel mode of mobility during “National Bike Month” in May.

That includes providing fiscal support for the construction of bicycle facilities, exemplified by the issuance of Bikeway Grants by the New Jersey Department of Transportation in February.

“Investing in bikeways helps promote alternate forms of transportation and reduces our reliance on cars,” noted Governor Phil Murphy (D) in a statement.

“Increased biking and walking are tangible steps we can take to achieve our climate change goals, while encouraging residents to live a healthy lifestyle,” he said.

The American Association of State Highway and Transportation Officials and the Adventure Cycling Association also signed a memorandum of understanding or MOU to formalize their 16-year partnership in February 2021 as they work with state DOTs to establish more than 50,000 miles of bike routes nationwide.

Ohio DOT Gets the Go-Ahead for $398M Road Program