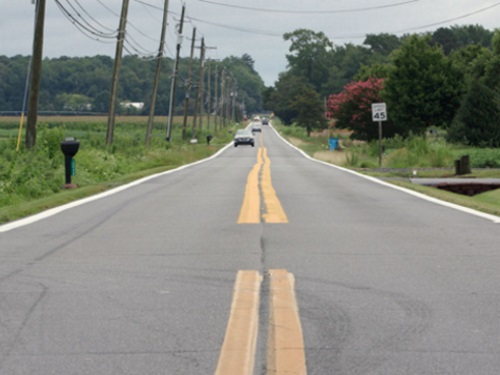 A demonstration project on MD 367, a two-lane road in Bishopville on Maryland’s Eastern Shore, tested a combination of enforcement, engineering, and public outreach efforts to reduce speeding.

[Above photo by IIHS]

A $100,000 grant from the Governors Highway Safety Association, Insurance Institute for Highway Safety, and the National Road Safety Foundation funded that “multipronged” anti-speeding project; a project overseen by Maryland’s Motor Vehicle Administration – a division of the Maryland Department of Transportation.

The effort in Bishopville focused on a 2.4-mile section of a road that is a popular route for beachgoers in the summer months. The project began by narrowing the roadway’s lanes in July 2021 by doubling the width of the painted edge and centerlines to 10 inches to help slow traffic. Workers also installed speed feedback signs in two locations on that road to show drivers how fast they are going as they passed other vehicles.

At the same time, state highway officials conducted public outreach by distributing flyers highlighting the lane narrowing to local residents and businesses while warning of upcoming speed enforcement efforts. Signs announcing the enforcement and encouraging drivers to slow down went up along the corridor.

In August 2021, officials conducted four five-day waves of enhanced, high-visibility enforcement, which resulted in more than 120 speeding citations – an effort accompanied by paid advertising that included social media messages, billboards, and advertisements in a local weekly and on the navigation app Waze.

“Speeding is dangerous and deadly, and no one solution will solve the problem,” explained GHSA Executive Director Jonathan Adkins in a statement. “Clearly, the Maryland project shows that a holistic approach can get drivers to slow down. When they do, it has a positive impact on their safety and that of everyone else on the road.”

There was broad public awareness of the Bishopville program, and that was likely a key to its success, GHSA noted. In surveys conducted as part of the study, drivers in the area were asked how likely it was that speeders would be stopped by the police.

The percentage who said it was likely or very likely was much higher after the program began than before its launch (69 percent versus 47 percent).

At the same time, the percentage of drivers in Bishopville and neighboring communities who said speeding was a major problem on MD 367 declined from 31 percent to 7 percent.

“Together with our partners at the Maryland DOT State Highway Administration, we were able to successfully bring together education, enforcement, and engineering to make an impact on motorists’ safety in Bishopville during the pilot program,” MVA Administrator Chrissy Nizer pointed out.

“We look forward to exploring additional opportunities to implement this comprehensive approach to reduce speeding in communities across Maryland,” she added.