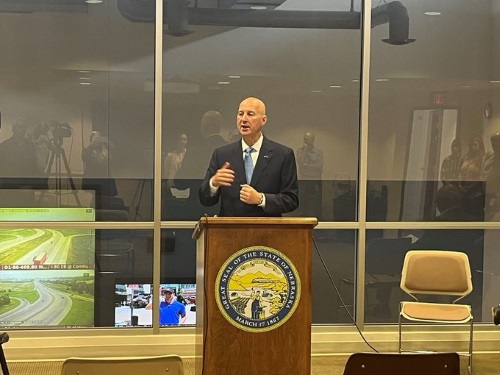 Governor Pete Ricketts (R) (seen above) and John Selmer, director of the Nebraska Department of Transportation, recently unveiled a new Omaha-based State Operations Center that will serve as a centralized command center to monitor and operate the state’s highway network.

[Above photo by the Nebraska Governor’s Office]

“The new State Operations Center advances our mission to provide more effective and efficient service to Nebraskans,” said Gov. Ricketts in a statement.

“The center will improve the State’s ability to update motorists on travel conditions,” he noted. “Providing timely information helps drivers make smart decisions behind the wheel so they can stay safe and avoid traffic.”

“As we look towards the future of transportation, we know effective management of the system is key,” added Nebraska DOT’s Selmer.

“Today, we celebrate our teammates whose work is vital to ensuring people reach their destination each and every day with minimal disruption,” he said, “I’m proud to be part of a team that take such pride in their work, regardless of the day or night.”

The agency said the concept behind the State Operations Center has undergone significant change since its formation 20 years ago.

Back then, one person took calls and updated the 511 system while relying on teammates in each of Nebraska DOT’s eight districts to do the same.

Initially, the centers did not operate on a full-time basis, but would activate for major events or incidents, such as weather events and major crashes in their areas. By contrast, the new State Operations Center will operate around the clock.

“The evolution of the State Operations Center is a testament to the people who have worked to build this center into what it is today,” said Jessica Sherwood, the center’s manager.

“Our response has shifted from individual people constantly being on call on the weekends and evenings, to where we are today in this building,” she noted. “Working 24 hours a day, seven days a week, 365 days a year, the State Operations Center’s number one goal and priority is to provide the most accurate and timely information to the traveling public through our 511 system as well as through social media posts and other public outreach.”