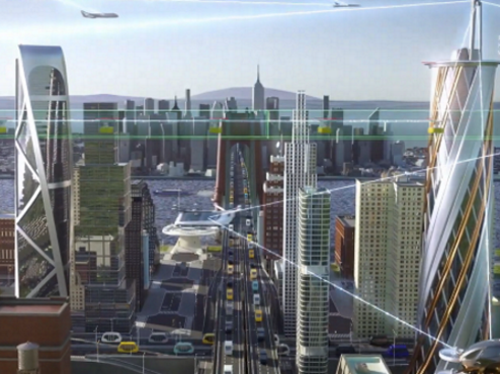 Drones will require important operating information – such as a notice of deteriorating weather conditions – if they are to function safely and efficiently within national air mobility networks.

[Above image via NASA]

To that end, NASA researchers are working to develop a “DRF” or “Data & Reasoning Fabric” information infrastructure that can help assemble useful data and reasoning services to provide in-time information to autonomous aircraft for more rapid real-time decision-making.

In a statement, NASA said that the intent of this research project is to form a connected, interwoven “fabric” of intelligence that sends autonomous aircraft specific, tailored information, wherever they are. This infrastructure would enable the vision of a “smart” city and airspace. While focused on future autonomous systems, NASA said DRF could apply to traditional air transport systems.

[Editor’s note: The American Association of State Highway and Transportation Officials supported the recent passage of the “Advanced Aviation Infrastructure Modernization” or “AAIM” Act to help foster new methods of air travel to move people and cargo between places previously not served, or underserved, by the traditional aviation industry.]

NASA said the goal of such Advanced Air Mobility or AAM systems is to move people and cargo between places previously not served or underserved by aviation using drones and electric vertical takeoff and landing or eVTOL aircraft.

[Editor’s note: One such commercial airframe, the Voloconnect fixed-winged eVTOL passenger aircraft, recently completed its first official flight in May.]

In the case of drone-based cargo deliveries in urban locales, NASA said data “nodes” within a national DRF information network would relay weather information, a detailed map from city authorities, and the locations of nearby aircraft to the unmanned aircraft.

That DRF information would allow the drone to “understand” with its own software that the weather is acceptable, that it should fly above 200 feet to avoid a building, and that it must allow room for an air taxi flying nearby. However, if there is dangerous weather, decision support tools enabled by DRF could provide the drone with a new flight route that avoids weather and obstacle dangers.

Such information networks are key to making AAM systems a viability reality, according to a recent report from the Government Accountability Office.

GAO’s report found that proponents of AAM systems believe such small eVTOL aircraft could reduce urban congestion, speed cargo delivery, and provide lifesaving medical transportation. AAM would do so by using aircraft that are simpler to design and construct, easier to fly, quieter, and less expensive to operate than traditional aircraft.

State departments of transportation are playing a growing role in the development of AAM networks, through a variety of drone and eVTOL aircraft initiatives.

“Advanced Air Mobility services show great promise to provide localized aviation services that are broadly accessible, equitable, sustainable, and serve all Minnesotans,” noted Cassandra Isackson, director of the  Minnesota DOT’s office of aeronautics. “We look forward to working with NASA and a broad range of local experts to help Minnesota plan for these new technologies.”

Minnesota DOT is one of three state DOTs that started working with NASA in May 2021 to conduct a variety of drone and AAM aircraft, studying how cargo-carrying drones and passenger-carrying air taxis can best be included in local and regional civic transportation plans.