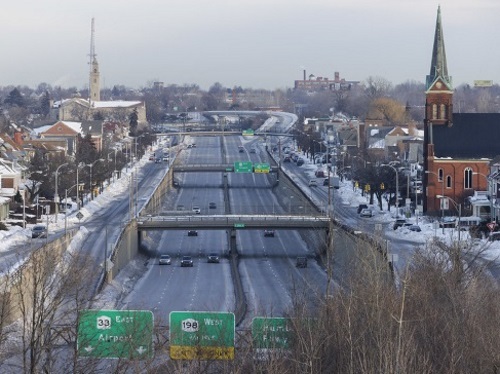 Constructed during the 1950s and 1960s, the Kensington Expressway replaced what had been a tree-lined boulevard – the Humboldt Parkway, designed by Frederick Law Olmsted – with a below-grade highway that severed the connection between the surrounding neighborhoods. The original boulevard connected Humboldt Park (now Martin Luther King, Jr. Park) with Delaware Park.

NYSDOT noted that its $32.8 billion five-year capital plan adopted as part of the state’s fiscal year 2023 budget includes up to $1 billion for reconnecting the east-west neighborhoods across the depressed section of the Kensington Expressway corridor.

That funding also aims to help re-establish the green space originally provided by Humboldt Parkway without compromising the long-term capacity of the important regional transportation link provided by the expressway, which carries 80,000 vehicles per day.

The agency said the engagement process for this project – which involves a series of public meetings – provides community members with an opportunity to learn about the various options considered for the project and to provide NYSDOT with feedback.

The input from those sessions and other upcoming public involvement opportunities will help inform the decision-making process for the project, especially in terms of its environmental review.

“The Kensington Expressway project represents a historic opportunity to reshape Buffalo and reconnect communities that were severely impacted by the highway’s construction more than a half century ago,” noted Governor Kathy Hochul (D) in a statement.

“My administration is committed to delivering on bold infrastructure projects that will help right the wrongs of the past through transportation networks designed to bring communities together, and routes that are friendlier for pedestrians and bikers,” she said. “It’s critical that the community has a voice in how this project proceeds and these scoping sessions will help us inform members of the public about all the options being considered and allow us to listen to their feedback.”

NYSDOT noted that it would consider the comments received at these public “scoping” sessions and respond to them in its Project Scoping Report due later this summer.

In addition, the agency plans to launch a new website on the Kensington Expressway Project on June 29, providing another forum for the public to learn about the project.