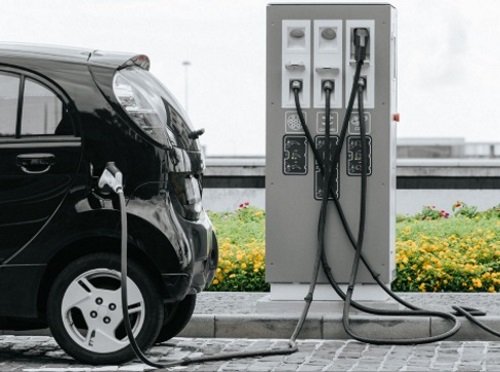 A host of state departments of transportation across the country recently released drafts of their electric vehicle or EV charging network development plans – networks funded by federal money through the National Electric Vehicle Infrastructure or NEVI formula program established by in February.

[Above photo by the Wyoming DOT]

The Mississippi Department of Transportation noted that, for state DOTs to receive NEVI fund allocations, agencies must submit EV infrastructure deployment plans by August 1 to the Federal Highway Administration.

Those plans must include detail on EV charging infrastructure deployment, existing and future conditions, and public engagement, the Mississippi DOT noted in a statement. The agency added that it is currently accepting comments on its plan through July 15.

Meanwhile, the Pennsylvania Department of Transportation launched a survey for the public to share feedback on the goals, infrastructure-prioritization, and program-administration components of the draft of its EV recharging plan. Comments on its plan are due by June 30.

“[We are] committed to making future-focused investments in Pennsylvania to update our highway network to accommodate more electric vehicles and hybrids,” said PennDOT Secretary Yassmin Gramian in a statement.

“We have received public and stakeholder feedback throughout this process, which is vital to understanding wants and needs as this transformational technology takes hold,” she added.

PennDOT expects to receive and distribute $171.5 million in funds for its EV charging infrastructure over the next five years through the NEVI formula program.

The New Mexico Department of Transportation is also seeking public input on its EV Infrastructure Plan via a survey. The agency said in a statement that it expects to receive $38 million in NEVI formula funds over the next five years to build out EV charging infrastructure, prioritizing locations along interstate highways within its state.

The South Dakota Department of Transportation recently hosted two in-person open house public meetings and a virtual, on-demand meeting to discuss and receive public input on the its EV Fast Charging Plan. Comments on its plan are due by July 8.

“We are striving to provide reliable and convenient EV fast charging on the Interstate system across the state,” explained Steve Gramm, South Dakota DOT’s planning squad leader, in a statement. “We want to create a convenient and accessible network by connecting to the national grid, and the community’s input is highly encouraged and valued at these meetings.”

Finally, the Wyoming Department of Transportation issued a draft of its EV infrastructure plan that is open for comments through July 27.

The agency said it expects to receive an almost $24 million allocation from the NEVI formula program over the next five years to establish and EV charging network along its federally-designated alternative fuel corridors: Interstate 80, Interstate 25 and Interstate 90.

Once the FHWA certifies the EV infrastructure build-out along the interstates, that allows Wyoming DOT to spend any remaining NEVI funding in areas outside of those specific interstate corridors, the agency said. However, Wyoming DOT stressed that roads or bridges are not eligible for NEVI funds and that no state funding will go towards installing, operating, or maintaining EV chargers deployed using NEVI funds.

Wyoming DOT Director Luke Reiner is seeking an exemption to the initial federal requirements to place EV charging stations every 50 miles and a maximum of one mile from an exit – an exemption due to the predominance of rural routes across Wyoming, projected limited initial EV adoption rates, and the overall system’s economic viability.

“We think this is a common-sense approach to bringing this infrastructure to Wyoming,” he noted in a statement. “We want any traveler, local or tourist, to be able to drive in our great state without worrying about whether the infrastructure is in place to support the type of vehicle they choose to drive.”

Additionally, Wyoming seeks to use NEVI funding to facilitate travel to popular tourist destinations. Tourism is the state’s second-largest industry, and major tourism destinations like Yellowstone National Park are off-corridor, it explained.