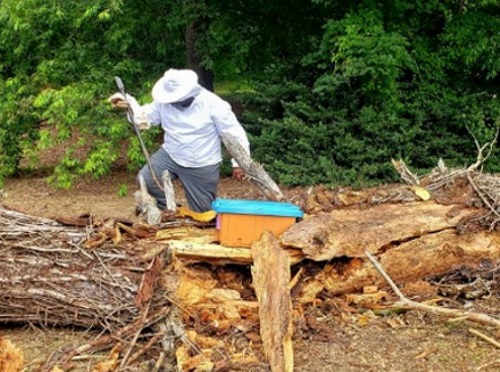 Routine highway maintenance conducted by a North Carolina Department of Transportation work crew turned into one “honey” of a rescue mission in early June.

NCDOT Division 9 maintenance crews were working on storm drain repairs and cutting down dead trees along U.S. 52 discovered something unusual: Two honey-making beehive colonies nestled within one of the dead trees.

The group came to the highway work site and collected one live queen, some honeycomb and most of the hive – relocating the bees to a small wooden hive in their own back yard. The bees rescued from the badly damaged hive at the U.S. 52 site will remain in the wooden hive until the queen starts laying eggs and the colony has enough bees to protect a larger hive, NCDOT said.

While honeybees are not listed as an endangered species, their numbers along with several other species of bees have been on the decline over the past few decades – largely attributed to climate change, harmful chemical use, and habitat loss, among other factors.

The loss of these important pollinators could have a significant impact on fruit and vegetable crops and wildflowers, noted Tiffany Williams-Brooks, who owns Miss Humble B’s Hive with her husband, Derek.

“When we look at the honeybee population, it is definitely on a decline,” she said in a statement. “When it comes to the number of hives beekeepers have nationally, the number has declined by at least 50 percent over the last several years.”

In terms of the rescued hives, Williams-Brooks said she could not find new brood and eggs. “We found open queen cells where new queens had emerged at some point,” she explained. “There were a lot of bees flying around, but they may not have belonged to that hive. We are in a nectar dearth, [or] scarcity of nectar, so often we will see bees coming in to take honey from other hives.”

Still, NCDOT Transportation Supervisor Kenny Butler – who, along with colleagues Greg Dellacona and Danielle Herrin, located Miss Humble B’s Hive to rescue the bees found along U.S. 52 – considers this bee relocation a success. “It was simply the right thing to do,” he emphasized. “We’re proud of the work our people do and are appreciative of the effort they take to just do the right thing.”

State departments of transportation across the country are engaged in a variety of efforts to preserve pollinator habitats, both for insects and specific plants.

For example, in October 2021, the Georgia Department of Transportation and the Georgia Association of Conservation Districts or GACD began installing 15 pollinator habitat sites in designated locations as part of a joint effort to educate state residents about the important role “pollinators” such as bees, butterflies, and other insects play in Georgia’s agricultural sector.

“This partnership provides Georgia DOT with the unique opportunity to create a safe and beautiful place for families and travelers to get up close and personal with the wildflowers and grasses [to] learn about how they impact the world around us,” explained Felicity Davis, a landscape architect manager with the Georgia DOT, in a statement.

Each blooming meadow contains a mix of nectar-bearing plants and milkweed, which sustain pollinators such as bees, moths, butterflies, birds, and small mammals such as bats. Those meadows also assist with TDEC’s Honey Project, which allows the public to purchase honey harvested annually within state parks across Tennessee.

It’s all part of “re-envisioning” the role state DOTs can play in turning roadway rights-of-way into protective habitats, Matthew Quirey – a landscape design and research fellow with The Ray, which is a public-private venture devoted to roadway technology testing along Interstate 85 in West Georgia

In a July 2021 episode of the Environmental Technical Assistance Program or ETAP Podcast, Quirey explained how state DOTs can view such roadside “landscapes” are “habitat assets” instead of maintenance burdens.

“In general, we are thinking more about how right-of-ways are being redesigned to bring habitats back together – to serve not just as transportation corridors but an ecosystem corridors as well,” he explained. That includes how right-of-ways can serve as habitats for pollinators, contribute to better storm water management in order to lessen pollution risks for nearby streams and rivers – incorporating sustainability and resiliency factors within more “environmentally sensitive” planning and design processes, Quirey said.