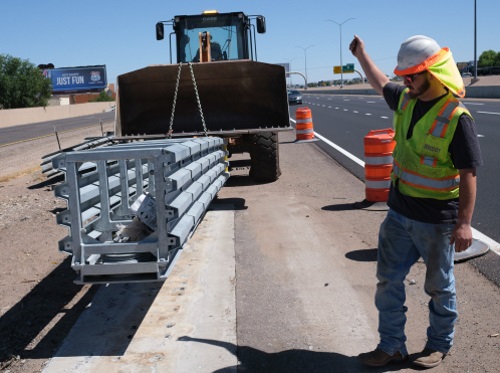 The American Association of State Highway and Transportation Officials joined 42 other organizations in calling for further delays in implementing new “Buy America” and “Build America Act” or BABAA requirements for construction materials due to inflation.

[Above photo by the New Mexico DOT]

In a June 21 letter sent to Mitch Landrieu, senior advisor to the president for infrastructure coordination, the groups said that, “infrastructure project costs continue to climb amid rising construction materials prices and shortages.”

Indeed, the letter emphasized that “material price increases have doubled or even tripled in some cases” while lead times for procurement and delivery of many of these materials has dramatically increased as well.

“The prospects for the rest of the year are worse,” the groups noted in their letter. “As a result, many infrastructure projects across the country face the risk of significant delay or a reduction in scope.”

That is why the groups said in their letter that the USDOT should delay those new rules beyond the current 180-day waiver issued by the agency in late May.

“The Administration should extend the 180-day BABAA waiver to ensure that projects are not needlessly delayed,” the letter said. “Rushing through this process could further drive inflation and result in significant delays to projects that will facilitate the enhanced movement of people and goods that, in turn, will help improve the nation’s constrained supply chain.”

The groups furthermore said it is “critical” for the USDOT “to conduct thorough analyses of domestic manufacturing capabilities and provide sufficient opportunity for public comment on draft rules.”

That will allow adequate time for “public and private entities to adjust and learn final rules” regarding new BABAA requirements, the letter said.