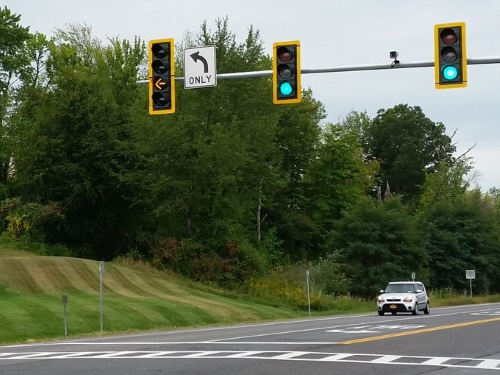 The New York State Department of Transportation today plans to continue upgrading traffic signals with yellow arrow phases as part of an effort to improve motorists and pedestrian safety in Western New York.

[Above photo by NYSDOT]

The agency is installing new traffic signals that feature a flashing yellow arrow phase as it makes improvements to 40 intersections under its responsibility across Western New York.

NYSDOT also emphasized that pedestrians crossing the road always have the right-of-way over turning vehicles.

“As part of our commitment to maintaining safe, navigable roadways, we will continue to closely monitor the traffic patterns in Western New York and across the state, and we will utilize the latest and most effective technologies to guide motorists,” she added.

The agency said it deploys traffic signals with a flashing yellow arrow phase at intersections where there is an exclusive right- or left-turn lane with a protected green arrow, stopping oncoming traffic to allow motorists to turn.

The signal changes from a green arrow to a solid yellow arrow, indicating that a red signal is coming and turning motorists should not enter the intersection. That red arrow allows traffic from the oncoming direction to begin proceeding through the intersection.

After opposing traffic gets the green phase, the turn arrow begins flashing yellow, indicating that turning vehicles must yield to oncoming traffic but may proceed when there is a safe gap in traffic. The signal then turns returns to a solid yellow arrow and then to a red arrow, allowing traffic on the other road to proceed through the intersection.

Several state departments of transportation are involved in traffic signal research as a way to make roadways safer.

For example, researchers at Purdue University in collaboration with the Indiana Department of Transportation unveiled in February a new wireless communication device that could help save lives at high-speed traffic signals.

In a broader effort, the American Association of State Highway and Transportation Officials is one of several organizations that’s been calling on the Federal Highway Administration over the last two years to finalize a new edition of the Manual on Uniform Traffic Control Devices or MUTCD to help improve roadway safety.