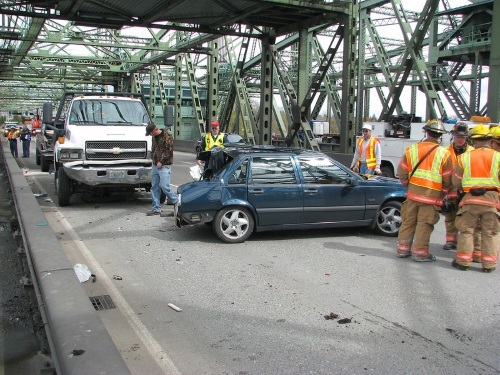 A new report compiled by national transportation research nonprofit TRIP noted that traffic fatalities in the U.S. surged by 19 percent from 2019 to 2021, even as vehicle travel rates plummeted due to the COVID-19 pandemic.

That report – entitled “Addressing America’s Traffic Safety Crisis: Examining the Causes of Increasing U.S. Traffic Fatalities and Identifying Solutions to Improve Road User Safety” – said that spike in traffic fatalities is largely related to higher rates of “risky driving” behaviors, such as speeding and impairment due to alcohol and/or drug use.

It highlights the National Roadway Safety Strategy or NRSS unveiled by the U.S. Department of Transportation in January. The NRSS – which many state and local transportation agencies are also adopting – serves as “a roadmap” for addressing the nation’s roadway safety crisis based on a Safe System approach.

AAA’s report found implementing cost-effective and needed roadway safety improvements on U.S. roadways would save approximately 63,700 lives, while also reducing the number of serious injuries due to traffic crashes by approximately 350,000 over a 20-year period, TRIP noted.

“Making a commitment to eliminating fatal and serious injuries on the nation’s roadways will require robust investment and coordinated activities by transportation and safety-related agencies,” said Dave Kearby, TRIP’s executive director, in a statement.

He added that funding to create “layers of protection” for the nation’s motorists, pedestrians and bicyclists, including safe road users, safe roads, safe vehicles, safe speeds and high-quality post-crash care is coming from the $1.2 trillion Infrastructure Investment and Jobs Act or IIJA, enacted in November 2021.

Jim Tymon, executive director of the American Association of State Highway and Transportation Officials, echoed Kearby on that point.

“The dramatic increase in roadway fatalities during the pandemic spotlights a national public health crisis that states have been working to resolve for years,” Tymon noted.

“The Infrastructure Investment and Jobs Act provides state DOTs with opportunities to expand activities in coordination with partners to double down on integrating a safe system approach and [other] strategies throughout the IIJA,” he added.

“In addition, the increased funding for infrastructure-related improvements and the ability to use a portion of the infrastructure safety funds for behavioral safety programs will advance a much-needed cross-cutting safety culture focused on zero traffic fatalities and injuries,” Tymon said.

Beyond fatalities, Wilson emphasized that “we cannot forget” that traffic crashes injure over 2.7 million people every year – and those injuries produce “lifelong physical, emotional, social, and other impacts.”

Because of those trends, he said state DOTs, federal transportation agencies, and others must “aggressively implement proven roadway strategies” as well as accelerate the development of “new and innovative countermeasures and technologies” that hold the promise of reducing crash fatalities and injuries in the future.