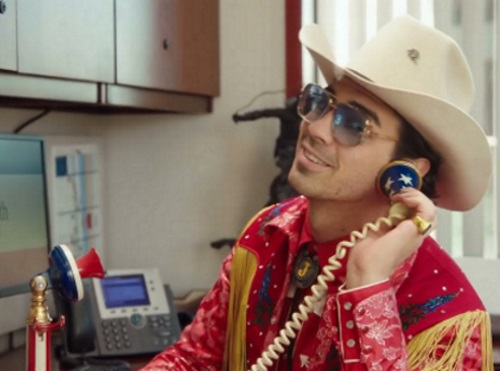 The Texas Department of Transportation has recruited popular singer, songwriter, and actor Joe Jonas (seen above) to star in a series of Public Service Announcements as part of the agency’s “Don’t Mess with Texas” anti-littering campaign.

[Above image by TxDOT]

The agency said the “show-stopping” performer –a former Westlake, Texas, resident – takes an “over-the-top” approach in the PSAs to remind folks to keep Texas roadways free of litter.

Joe Jonas – the second of three Jonas Brothers – began appearing in television and radio PSAs running on both broadcast networks and digital platforms statewide in June. The aim of the campaign seeks to encourage Texans – young and old – to dispose of litter properly, in a trashcan, all the time.

“Joe understands the pride that we have in our state and in keeping it clean for everyone to enjoy its beauty, now and in the future,” explained Becky Ozuna, coordinator for the “Don’t mess with Texas” campaign, in a statement.

“We are thrilled to have Joe join us in bringing attention to our litter-free message through his comedic talent and timing,” she said.

Joe Jonas is the latest in a line of Texas celebrities who have lent their support to the campaign, including country western musicians George Strait and Willie Nelson, plus actors Eva Longoria and Matthew McConaughey.

State departments of transportation across the country are involved in a variety of anti-littering efforts.

Those Seabin devices work continuously to skim and collect marine debris from the surface of the water. Each receptacle can remove up to 3,000 pounds of marine debris annually, while also filtering out gasoline, oils, and “micro-plastics” from the water.