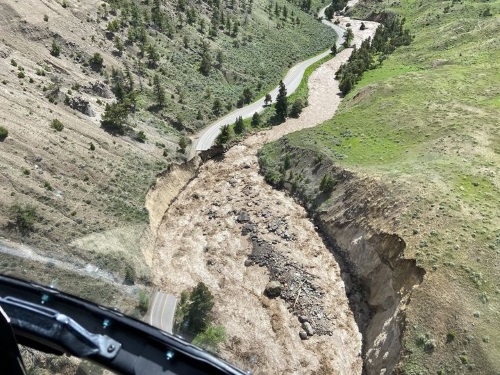 [Above photo by the National Park Service]

Beginning June 12, unprecedented amounts of rainfall caused substantial flooding, rockslides, and mud slides within the north half of Yellowstone and southern Montana – including Gardiner, Livingston and Red Lodge – as well as parts of Wyoming. Historic water levels, aided by wet, heavy late May snow, caused severe damage to roads, water and wastewater systems, power lines, roadways and bridges, and other critical infrastructure in the Yellowstone National Park area.

Some roads remain closed, causing long detours for residents and visitors – closures affecting not just Yellowstone itself but surrounding communities in Montana and Wyoming that rely on tourism as an important part of their local economy.

The bulk of the FHWA’s first $65 million in ER funding – issued June 23 – went to the National Park Service to reopen roads and prevent further damage in the park, which is located largely in the northwest corner of Wyoming, extending into Montana and Idaho. The Montana DOT received $3 million and the Wyoming DOT $2 million in ER funds to repair damage to state roads and bridges near Yellowstone.

For example, the Montana DOT began emergency rockfall mitigation work on Montana Secondary 508 as the heavy flooding and rainfall created conditions whereby the rock wall along that road is in danger of collapsing. The agency said in a statement that scaling work is underway and over the next few weeks will focus on removing dangerous rock outcroppings.

Meanwhile, Wyoming DOT maintenance crews helped remove downed trees and other debris closing area roadways and bridges, while also helping assess damage inside the northeast entrance of Yellowstone via the use of drones, which collected photographs and video showing three large washouts along the main Yellowstone roadway.

The FHWA issued $5.7 million ER funds on July 1 to the U.S. Forest Service to help repair flood damage to roads and bridges in Custer Gallatin National Forest in southcentral Montana, which connects to Yellowstone.

The agency noted that its ER program provides funding to states, territories, tribes, and federal land management agencies to help repair and/or replace highways and bridges damaged by natural disasters or other catastrophic events.

The program also encourages those parties to identify and implement measures to make the restored infrastructure more resilient and better able to withstand damage from such events.