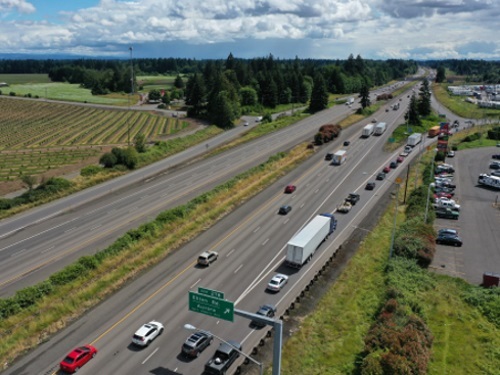 The Federal Highway Administration plans to issue a notice of proposed rulemaking that requires states and municipalities to track and reduce greenhouse gas or GHG emissions.

FHWA said in a statement that the new rule would establish a national framework for tracking state-by-state progress by adding a new GHG performance management measure to the existing national performance measures to help states track performance and make more informed investment decisions.

The new rule would also create what the agency calls a “flexible system” under which state departments of transportation and Metropolitan Planning Organizations would set their own declining targets for on-road greenhouse gas emissions from roadway travel on the National Highway System.

It also requires state DOTs and MPOs to report biennially on their progress in meeting the declining targets they establish, with FHWA tasked to assess significant progress toward achieving those targets.

The agency noted that the $1.2 trillion Infrastructure Investment and Jobs Act – enacted in November 2021 – makes more than $27 billion in federal funding available to help state DOTs and MPOs achieve their targeted GHG reductions via a variety of programs.

The agency noted its proposed rule also aligns with the Biden administration’s net-zero targets as outlined in the national policy established under Executive Orders 13990, “Protecting Public Health and the Environment and Restoring Science to Tackle the Climate Crisis,” and 14008, “Tackling the Climate Crisis at Home and Abroad.”

The American Association of State Highway and Transportation Officials noted that state DOTs recognize that the transportation sector is one important element – along with electricity, industry, commercial, residential, and agricultural sectors – in the country’s collective efforts to reduce GHG emissions.

“State DOTs can play an important role in  the efforts of the surface transportation sector to achieve GHG reduction outcomes based on activities that they can directly influence, as about half of states are already measuring their progress in reducing GHG emissions,” noted Jim Tymon, AASHTO’s executive director.

However, AASHTO stressed that there cannot be a “one-size-fits-all” approach to GHG reduction. To that end, the group said it plans to analyze the proposed rulemaking more deeply including the potential impact of USDOT’s proposed “percent change in tailpipe emissions.”

AASHTO also plans to use the 90-day regulatory comment period to have conversations between its members and FHWA about FHWA’s legal authority to establish a new performance measure as well as how states and FHWA can best work together to reduce GHG emissions.

AASHTO also noted its commitment to the national performance management framework established in law 10 years ago as part of MAP-21 – the Moving Ahead for Progress in the 21st Century Act, enacted in 2012 – and emphasized its continuing importance in guiding state DOTs in their investment and asset management decisions.

In a related announcement, FHWA added 249 new designations to its Alternative Fuel Corridor program, with those corridors now covering 85 percent of the National Highway System: roughly 190,000 miles out of the total NHS network of 222,000 miles.

Under the new National Electric Vehicle Infrastructure formula program, those Alternative Fuel Corridors will serve as the “backbone” for the national EV charging network, the agency added.

“These Alternative Fuel Corridor designations will bring EV charging stations to more locations nationwide,” Stephanie Pollack, FHWA’s deputy administrator, noted in a statement. “Having a national EV charging network is key to our transition to electric and alternative fuel vehicles, which in turn will save drivers money and reduce emissions that worsen climate change.”