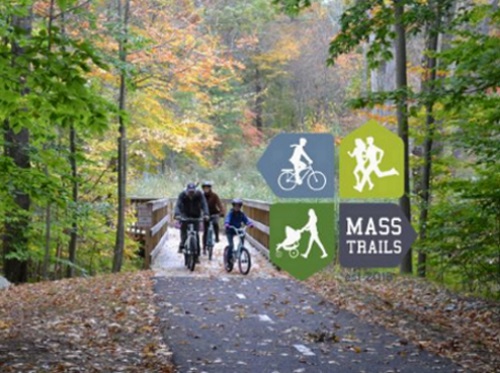 [Above image via MassDOT]

Additionally, the MassTrails program began collaborating with the Conine Family Foundation’s “HubLuv Initiative” in 2022 – an initiative that seeks to keep improving the state’s existing trail network for bicyclists and pedestrians alike.

“Over the last couple of years, the importance of the Commonwealth’s trails and other natural resources has never been greater for children and families seeking to get outside and explore nature,” the governor noted in a statement.

“By partnering with organizations like the Conine Family Foundation and working with municipalities across the state, we will continue our ongoing efforts to provide a high level of access for people of all abilities to enjoy,” he said.

The MassTrails Grant Program supports projects that build public-private partnerships to maintain and improve existing trails and construct new ones across the state.

“Each of these projects will help increase the number of residents who have access to a shared-use path, and expanding the network of trails is pivotal to creating comfortable, safe, and convenient travel pathways for people to walk and bike to work, run their errands, or get outside for fun and exercise,” he said.

State departments of transportation across the country support trail programs in a variety of ways.

In June, the District Department of Transportation recently helped open the latest section of the Metropolitan Branch Trail or MBT; a section that closes a gap in Washington, D.C.’s pedestrian and bicycle network and that represents a key milestone in the goal to complete the nearly 900-mile regional trail network.

In August 2021, the Delaware Department of Transportation helped complete the Phase II-Capital City Trail; a new multi-use path along Route 10 designed for pedestrians and bicyclists.

Related trail-support efforts on the part of state DOTs include the creation, update, and distribution of statewide trail maps.

The maps continue to feature information on local trails and paths, in addition to recommended bicycle routes on local streets and connections to transit. Details on attractions such as campgrounds, parks, and other points of interest also are included, the agency said.

“These maps will provide residents and visitors a valuable and handy tool to plan for their daily travels as well as trips for fun and recreation,” noted Illinois DOT Secretary Omer Osman in a statement.