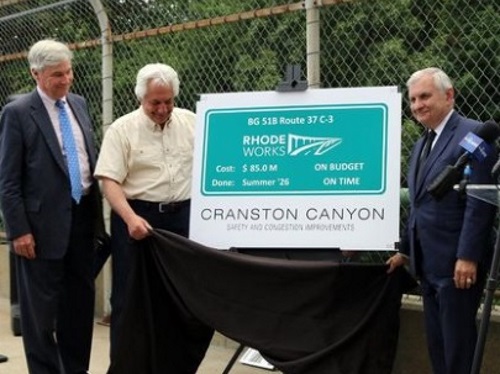 The Rhode Island Department of Transportation recently hosted a groundbreaking ceremony for the $85 million Cranston Canyon Project that will rehabilitate deteriorated bridges along the western end of Route 37 and its intersection with I-295 while making numerous safety improvements along the “canyon” section of I-295 – the nickname given for the rocky outcropping along this section of highway.

The Cranston Canyon is a design-build project, meaning it allows design and construction activities to occur at the same time while also maintaining traffic flow with the least disruption possible. This approach, in concert with the use of accelerated bridge construction methods, will shave a year off the construction schedule, RIDOT said.

“RIDOT is able to move ahead with this project thanks in large part to the efforts of our Congressional delegation which once more went to bat for us and helped secure a $21 million federal BUILD [Better Utilizing Investments to Leverage Development] grant,” noted RIDOT Director Peter Alviti in a statement.

“With these extra funds, we have been able to put together a very comprehensive project to solve traffic problems, fix deteriorated bridges and make these highways safer – all in a single project,” he added.

This is one of 60 projects RIDOT plans to work on during its 2022 construction season – a slate of infrastructure initiatives valued at $1.8 billion.

Fueled by an infusion of funds from the $1.2 trillion Infrastructure Investment and Jobs Act – enacted in November 2021 – RIDOT said it has accelerated about 100 projects within its 10-year transportation construction plan.