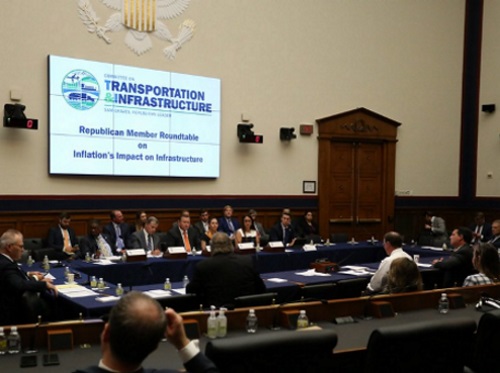 “Companies, states, and local governments are struggling with the cost of fuel, materials, equipment, and everything that goes into planning projects and building our infrastructure,” he added, noting that the meeting with transportation industry stakeholders “made it clear that these problems are multi-layered and feed into one another. And it will only get worse if we go into the recession that many economists are predicting.”

Louisiana DOTD’s Wilson noted in his opening remarks at the hearing that state departments of transportation, like the rest of the transportation industry, face severe economic headwinds across the United States, such as inflation, higher material costs, and growing labor shortages.

“The issue of inflation is impactful, it is having an effect not just on state DOTs but on industry in general,” he said. “The most important thing for us to do is to manage expectations. You’ve heard it said before, everyone has a right to their own opinions, but the facts are the facts. There is a percentage of expected [infrastructure projects] that will be not delivered because of inflation, because of supply chain and workforce issues.”

However, Wilson emphasized that state DOTs are committed to delivering the transportation projects under their purview despite those conditions, as they are “accustomed to limited resources and managing these kinds of issues over the long haul.”

Later that same day, Wilson expanded on his inflation-related views during a panel discussion at public-private partnership conference hosted by the American Road & Transportation Builders Association.

“The most looming impact of inflation for state DOTs is that it is cutting into 30 percent to 40 percent of what we are doing,” he explained.

“In terms of the global supply chain, materials are becoming harder to pay for and even harder to get. We’ve seen some with 35 percent of their price hike due to rising transportation costs alone,” Wilson noted.

“Workforce issues are becoming more significant as well as state DOTs are struggling to keep people employed and hire people, too,” he added. “And when we seek to hire for a position yet get zero applicants, that is both alarming and a major challenge.”