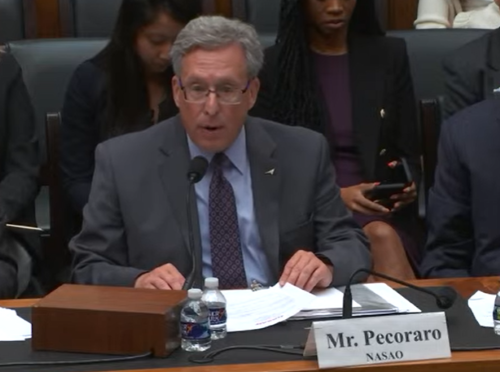 Gregory Pecoraro (seen above) – president & CEO of the National Association of State Aviation Officials or NASAO – stressed in a July 13 hearing on Capitol Hill that “additional investment at the federal level is needed” to clear the over $40 billion backlog of priority Airport Improvement Program or AIP-eligible projects, especially among general aviation airports.

[Above image via the House T&I Committee]

In his testimony before the House of Representatives Committee on Transportation & Infrastructure, Pecoraro stressed that state aviation agencies continue to play an important role in managing the National Aviation System.

Within that network, the role of states in managing and promoting aviation as a vital access point to the entire transportation network is becoming even more critical especially in terms of maintaining airport infrastructure under their purview.

“Unlike the Federal Aviation Administration, which is solely focused on safety, state aviation agencies are also engaged in supporting an aviation system that is both the safest in the world and a vital contributor to strong and vibrant local economies,” he said at the hearing.

“Looking to the future of aviation, many states are already actively engaged in managing un-crewed aircraft systems [such as drones] and advanced air mobility (AAM) initiatives,” Pecoraro added.

State departments of transportation also play a critical role in delivering infrastructure investment for airports, which in turn provides a range of economic benefits. For civil aviation, states directly supported four million jobs and generated $850 billion in total economic activity according to a 2020 report by the FAA.

That is one reason why NASAO’s Pecoraro said the $40 billion backlog of priority AIP-eligible projects between 2021 and 2025 is such a huge issue, especially as the FAA indicates that only $14 billion is for planned AIP-eligible projects at general aviation, reliever, and non-primary commercial service airports.

“While overall AIP levels have not changed in nearly 10 years, costs certainly have,” Pecoraro explained at the House T&I hearing, held by its Subcommittee on Aviation.

“Recent inflationary pressure has aggravated the situation even more,” he said. “Currently, the nation’s general aviation airports have unmet needs for construction, repair, and maintenance of runway, taxiways, and other AIP eligible projects.”

He added that, looking to the future, general aviation airports must transform into “greener, more sustainable facilities” as well as increase their connection to multi-modal transportation systems across the country.