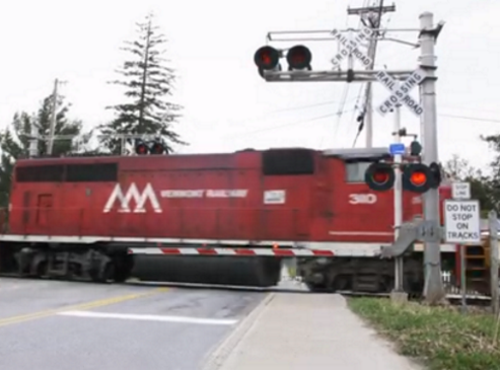 A new video issued jointly by the Vermont Agency of Transportation – known as VTrans – and Operation Lifesaver Inc. or OLI highlights of the importance of highway-rail crossing safety

[Above image by VTrans]

The video focuses on ways to improve safety at highway-rail crossings. OLI – a non-profit public safety education and awareness organization – noted that a train hits a person or vehicle every three hours in the United States.

OLI recently celebrated its 50th anniversary in June. At a special anniversary event held in Denver, Amtrak unveiled a P-42 diesel locomotive emblazoned on both sides with the message “See Tracks? Think Train!” to commemorate OLI’s anniversary while helping share its rail safety message across the country.

“Over the past five decades, Operation Lifesaver and its partners have helped reduce railroad crossing incidents by 84 percent, from 12,000 in 1972, the year Operation Lifesaver started, to 1,900 in 2020. But there is still work to be done,” noted OLI Executive Director Rachel Maleh in a statement.

In April, additional funding from the Posner Foundation of Pittsburgh allowed OLI – in partnership with the Federal Railroad Administration – to recently issue extra grants for rail safety activities in additional states, with 14 states overall receiving $245,525 in combined grant funds.