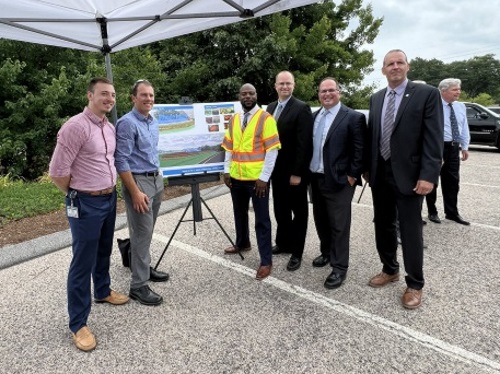 A $12.9 million Airport Connector resurfacing project in Warwick, RI, is going to include a “massive” landscaping effort that will provide more than 400 plants and trees in both the median and the shoulder of the new roadway.

Governor Dan McKee (D) and Rhode Island Department of Transportation Director Peter Alviti, Jr., hosted a groundbreaking ceremony for the new project for a variety of federal, state, and local officials on July 18.

The governor noted in a statement that RIDOT is blending the Airport Connector’s landscaping “seamlessly” with similar plantings around Rhode Island T.F. Green International Airport to create a more “visually appealing” gateway for the state.

“For thousands of visitors to Rhode Island, the Airport Connector is Rhode Island’s welcome mat,” Gov. McKee said. “These improvements will make vital safety improvements while providing a great first impression of our great state.”

The new road surface will give the 20,000 vehicles a safer riding surface when traveling the one-mile Airport Connector and three miles of Route 1 and Route 1A (known as the “Post Road”) from Coronado Road to Warwick Avenue.

On the I-95 southbound ramp, the project – scheduled for completion in June 2023 – will replace the median guardrail and install a grass swale, RIDOT said.

“Rhode Islanders have seen the transformation in our roads and bridges, and thanks to the new [$1.2 trillion] Infrastructure and Investment Jobs Act, we will be kicking our paving program into high gear and providing the type of safe, smooth roadways Rhode Islanders and all visitors to Rhode Island expect and deserve,” noted RIDOT Director Alviti.

He added that this project is part of the $92 million RIDOT plans to spend on paving projects in 2022 as well as part of the $492 million slated for statewide paving work over the next five years.

The incorporation of landscaping efforts as part of this RIDOT roadway project is something other state departments of transportation are mimicking in other parts of the country.

For example, in November 2021, the Ohio Department of Transportation made final changes to its Opportunity Corridor Boulevard Project in Cleveland; an undertaking specifically designed to revitalize the neighborhood between I-490 and University Circle once known as the “Forgotten Triangle” due to the lack of economic activity.

“Transportation is about connecting people. This isn’t just an investment in asphalt, concrete, and steel, this is an investment in people, business, and opportunity,” said Governor Mike DeWine (R) at the time.