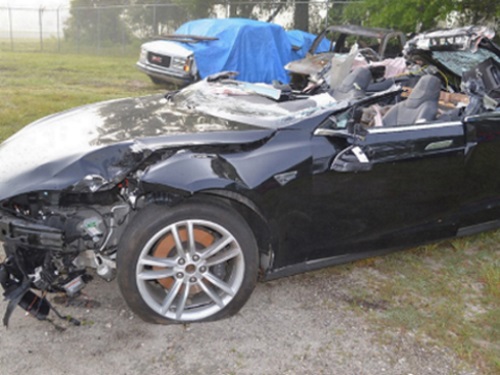 [Above photo by NTSB]

NHTSA is supporting this campaign, which runs from July 20 through August 14, with an $8 million national media buy featuring English and Spanish-language ads running on television, radio, and digital platforms.

Those advertisements target drivers aged 18 to 44, whom data show are most likely to be involved in speeding-related fatal crashes.

According to NHTSA data, 11,258 people died in speeding-related crashes in 2020, with speeding a contributing factor in 29 percent of all fatal crashes. Even with fewer cars on the road during the COVID-19 pandemic, a dramatic 17 percent increase in speeding-related deaths occurred in 2020 compared to 2019.

“Much like impaired driving, speeding can steal the lives of everyone using our roads: drivers, passengers, pedestrians and cyclists,” noted Dr. Steven Cliff, NHTSA’s administrator, in a statement.

“We cannot accept the status quo,” he added. “Speed-related deaths aren’t inevitable. They’re preventable, and everyone has a role in addressing this crisis on our nation’s roadways.”

To help spread this message at the state level, NHTSA has developed a toolkit of resources for its partners, including a media work plan, sample press release and enforcement-themed assets.

Several states are conducting their own anti-speeding campaigns in concert with NHTSA’s national effort.

The North Carolina Department of Transportation noted in a statement that, in 2021, some 424 people died statewide in speeding-related crashes.

Moreover, speed was a contributing factor in nearly a quarter of all fatal crashes statewide in 2021, with males under 39 account for nearly half of all speeding-related crashes.

Meanwhile, the Connecticut Department of Transportation’s Office of Highway Safety launched a high-visibility anti-speeding enforcement effort in partnership with state and local law enforcement on July 1 that runs through September 5.

“When speeding is involved in a fatal crash, it is never an accident,” said Connecticut DOT Commissioner Joseph Giulietti in a statement. “Our goal is to change this deliberate behavior and send a message to drivers that they could avoid speeding-related deaths in Connecticut if all drivers obeyed the posted speed limits.”

In general, deaths from vehicle crashes have been falling since the late 1960s. However, when COVID-19 hit, a national surge in crashes and fatalities occurred. According to NHTSA data, an estimated 42,915 people died in motor vehicle crashes in 2021, a 10.5 percent increase from the 38,824 deaths in 2020 – the largest number of projected fatalities in that period since 2005.

“Sadly, lives are behind each of these numbers – lives tragically lost,” stressed Connecticut DOT’s Giulietti. “Speed limits are put in place to protect all road users. Speeding endangers not only the life of the speeder but everybody on the road around them, including law enforcement officers. We are asking all Connecticut drivers to be more vigilant than ever.”