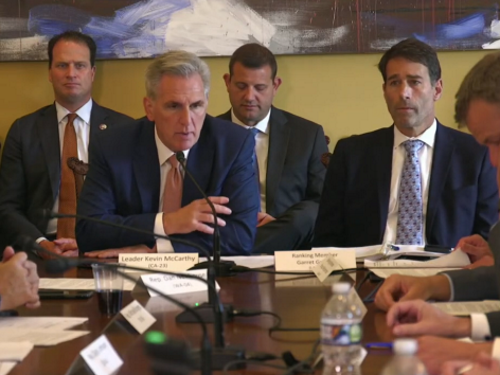 Rep. Kevin McCarthy, R-Calif. (above at left) – minority leader for the House of Representatives – and Rep. Garret Graves, R-La., (above at right) hosted a Republican roundtable discussion on July 19 entitled “Let America Build” that incorporated a state department of transportation perspective on environmental permitting and other regulations associated with infrastructure projects.

[Above photo via Rep. McCarthy’s office]

“What we are doing today is we’re releasing a component of our Energy, Climate, and Conservation Task Force that’s called ‘Let America Build’ – focused on cutting through red tape” for infrastructure projects explained Rep. Graves in a statement.

“We are facing an energy crisis in America and it doesn’t have to be that way,” Rep. McCarthy added. “We can be energy independent [and] we can also protect our environment at the same time.”

Carlos Braceras, executive director of the Utah Department of Transportation, spoke to the roundtable to highlight the role states can and should play in helping safely speed up the delivery of infrastructure projects critical to U.S. economic vitality and security.

“Today we have over 800 projects underway at Utah DOT; all of them undergoing the permitting process this roundtable is talking about,” he said. “I think it is really important to understand state DOTs are not successful if they do not deliver the ‘community of our dreams’ expected by our constituents – that includes building a great natural environment.”

Braceras – who served as the 2018-2019 president of the American Association of State Highway and Transportation Officials and currently chair of the AASHTO Center for Environmental Excellence technical working group and the AASHTO Committee on Design – said he believes Utah DOT and other state DOTs help improve the natural environment with the projects in their purview.

That work also improves the “human environment” affected by such projects, which always aim to build and maintain a “first class transportation system” that the public can rely upon, he noted.

“The key thing is that, if our transportation projects work well, no one notices them – and we work hard for them not to be noticed,” he explained. “It’s when they don’t work and when they harm the environment that we get noticed. That’s why Utah takes responsibility for the NEPA assignments for its projects – we follow the same federal regulations and set even higher standards so we can move [project] permits forward much faster.”

However, even with this progress, the environmental process still takes too long and is unduly costly and delay-prone, Braceras said. That is why state DOT executives like himself, along with AASHTO members, seek to reduce unnecessary and duplicative requirements to improve the delivery of a project while also ensuring such projects strictly adhere to high environmental standards.

“To achieve further streamlining, focus must be paid to not only making continued improvement in the NEPA process itself, but also in streamlining the substantive federal environmental processes – all while remaining responsible stewards of taxpayer resources and both human and natural environments,” he said.