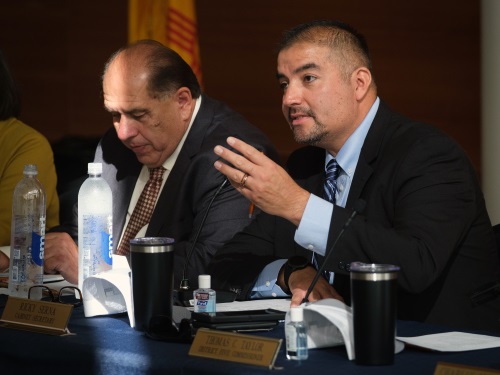 Governor Michelle Lujan Grisham (D) made leadership appointments at three state agencies on July 14, one of them making Ricky Serna (seen above at right) secretary of the New Mexico Department of Transportation.

Serna, who had been acting secretary for the New Mexico Department of Workforce Solutions and director of the State Personnel Office, officially began his new role as New Mexico DOT secretary on July 18.

Justin Reese, who had been serving as the agency’s acting secretary, has returned to his previous position as New Mexico DOT deputy secretary.

Serna has worked in public education and state government for over a dozen years and previously served as deputy cabinet secretary for the New Mexico Department of Workforce Solutions.

Prior to joining the Gov. Lujan Grisham’s administration, he worked in a variety of roles in New Mexico higher education institutions. A first-generation college graduate from Española, he earned a bachelor’s degree in elementary education and a master’s degree in educational leadership, both from New Mexico Highlands University.

“The Department of Transportation does such critical work in our state, whether that’s helping to clear debris off roadways during recent flash flooding or making our roads safer for vehicles and pedestrians,” Serna said in a statement. “I am looking forward to leading the agency.”