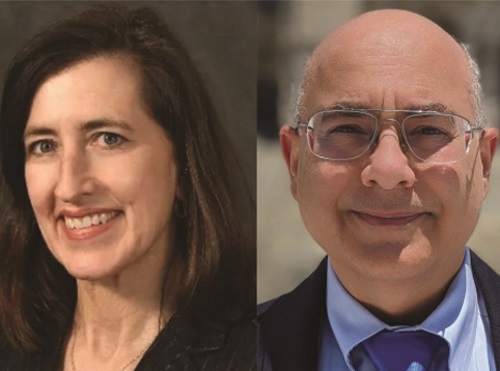 The American Association of State Highway and Transportation Officials recently named Nancy Daubenberger (above at left) and Christos Xenophontos (above at right) as chairs for two of its committees.

Daubenberger, named commissioner of the Minnesota Department of Transportation in late May, will serve a two-year term as chair of Committee on Right of Way, Utilities, and Outdoor Advertising Controls – known as “CRUO.”

CRUO reviews and recommends changes to laws, rules, regulations, and procedures affecting right of way, utility, and outdoor advertising issues, as well as maintaining three AASHTO publications on those subjects.

A 22-year veteran of the Minnesota DOT, Daubenberger previously served as the agency’s deputy commissioner, chief engineer, assistant commissioner for engineering services, and the state bridge engineer. She also served in a number of planning, project management, and design roles for the Minnesota DOT Bridge Office and Metro District.

Meanwhile, Xenophontos – assistant director at Rhode Island Department of Transportation – will serve a two- year-term as chair of the Committee on Performance-Based Management.

Performance management helps guide critical decision making for a state transportation agency, from planning through systems operations, including the agency’s own organizational performance.

The committee addresses all aspects of performance management including asset, organizational, risk, and system mobility and emerging technologies as it relates to federal regulations, current industry practices, as well as new approaches and concepts.

Xenophontos’ career with RIDOT spans more than three decades and he has more than 35 years of experience in the transportation field as an engineer, project manager, and administrator.