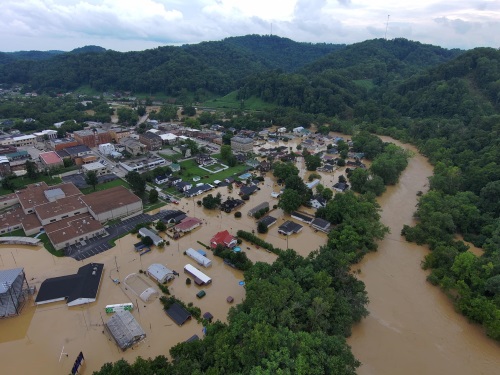 The Federal Highway Administration issued guidance on July 29 for a new $7.3 billion formula funding program created by the $1.2 trillion Infrastructure Investment and Jobs Act or IIJA enacted in November 2021 to help states and local communities better prepare for and respond to extreme weather events such as wildfires and flooding.

In general, eligible projects include highway and transit projects, bicycle and pedestrian facilities, and port facilities including those that help improve evacuations or disaster relief.

States are encouraged to work with regional and local partner organizations to prioritize transportation and emergency response improvements, as well as address vulnerabilities, noted Stephanie Pollack, deputy administrator for the Federal Highway Administration.

“We see the effects of climate change and extreme weather play out across the country every week, with extreme temperatures and rainfall and resulting flooding and wildfires that damage and in some cases destroy roads, bridges and other transportation infrastructure,” she said in a statement.

“The PROTECT formula program will help make transportation infrastructure more resilient to current and future weather events and at the same time make communities safer during these events,” Pollack added.

Eligible project choices may include the use of natural or green infrastructure that acts as a “buffer” against future storm surges and provide flood protection, as well as aquatic ecosystem restoration.

FHWA added that its new guidance applies to the PROTECT formula program only, with the agency planning to release a notice of funding opportunity for the program’s discretionary grant initiative later this year.

State departments of transportation consider formula funding to be a critical aspect of national efforts to improve infrastructure resiliency.

Edwin Sniffen, deputy director of highways for the Hawaii Department of Transportation, highlighted that viewpoint in a Senate Committee on Appropriations hearing in May 2021.

“When considering funding for resilience, the current core formula program eligibility could be expanded to consider resilience improvements,” he said. “Or formula funding could be set aside to focus on resilience-related planning, coordination, and evacuation; or, a discretionary grant program for adaptation strategies could be established.”

Sniffen added that additional funding and an expedited project delivery process would “greatly aid” getting more resilience initiatives out of the theoretical stages and into practice on the nation’s streets, bridges, runways, and harbors.

“The Hawaii DOT is currently approaching building resilience into our systems using a variety of approaches, including pursuing green infrastructure such as carbon mineralized concrete and adding recycled plastics to asphalt mixes,” he noted. “Investing in resilient infrastructure on a federal level will enable us and other transportation agencies to implement better and greener infrastructure.”