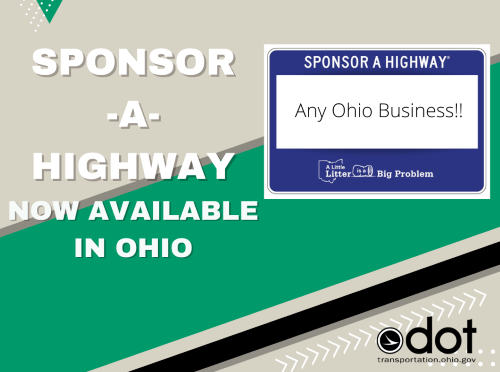 A new litter control program launched and administered by the Ohio Department of Transportation seeks to broaden engagement by the business community in its trash removal efforts.

The statewide program allows businesses and groups to fund litter removal services along one-mile, one-direction segments of state highways. In exchange for their sponsorship, Ohio DOT displays the name of the business or group on a sign within their sponsored segment.

Governor Mike DeWine (R) is the driving force behind the new program, noted Jack Marchbanks, Ohio DOT’s director, as “there is a need to do more” regarding litter prevention and abatement statewide.

“The appearance of our highways is important to Gov. DeWine and to us as the state agency charged with maintaining highways and interstates,” Marchbanks explained in a statement. “This new program provides support to us in our litter control efforts and allows area businesses the opportunity to promote their advocacy for cleaner highways in their communities.”

Segments are cleaned a minimum of once per month by employees working for two separate vendors who were awarded the contracts for the state. The program also complements Ohio DOT’s existing Adopt-A-Highway program, where volunteer groups adopt a two-mile segment of two-lane highway.

“With this program, area businesses may share in the task of litter removal along our highways,” said Marchbanks.

Facing increased amounts of trash along the highways and limited staff, the Kansas Department of Transportation created an incentive stipend for groups that actively participate in the program.

The stipend is $190 per highway section, which is generally two miles long. Adopt-A-Highway groups receiving $600 or more in payments in a calendar year will receive a 1099 tax form.

Meanwhile, new and existing groups will be able to submit a request for payment after their group completes a highway cleanup. The group will submit forms identifying the location, date, number of volunteers and number of bags as well as before and after photos of the site.

“We appreciate all the volunteers’ efforts to assist in removing trash along our highways,” said Clay Adams, Kansas DOT’s director of field operations, in a statement.

“They are providing a valuable service to the state,” he said. “These stipends will benefit groups as well as increase the number of groups taking part in the clean-up program.”