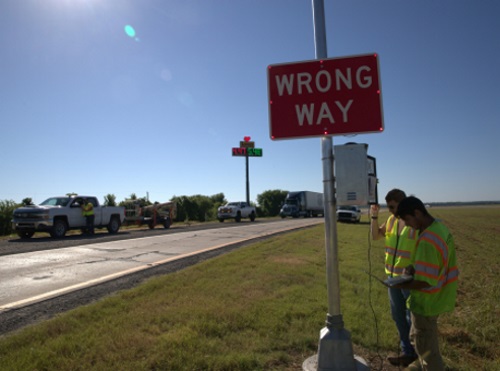 The Oklahoma Department of Transportation is pilot testing a wrong way detection and alert system on six ramps along Interstate 40 in the eastern part of the state.

[Above photo by the Oklahoma DOT]

Using thermal cameras, the system identifies when a vehicle enters an exit ramp in the wrong direction and displays flashing lights on already posted Wrong Way signs to increase noticeability.

Installation of internally lit “Do Not Enter” signage improves the nighttime visibility of those warning signals as well, the agency said. Oftentimes, wrong way drivers fail to turn on their headlights, making it difficult to see reflective signage. Internally lit signs are more visible regardless of whether a vehicle’s headlights are on, Oklahoma DOT noted.

“While modern interchange designs significantly lessen the possibility of wrong-way incidents, this pilot program allows us an opportunity to stop many of these incidents before drivers enter the highway and endanger themselves and other motorists,” noted Rick Johnson, director of project delivery for the Oklahoma Transportation Cabinet in a statement. The cabinet includes the Oklahoma DOT and the Oklahoma Turnpike Authority.

According to analysis by the AAA Foundation for Traffic Safety issued in March 2021, some 2,008 deaths occurred due to wrong-way driving crashes on divided highways between 2015 and 2018 for an average of approximately 500 deaths a year; up 34 percent from the 375 deaths annually from 2010 to 2014.

“Safety is Oklahoma DOT’s top priority and we hope this system will increase the safety of everyone who travels Oklahoma’s highways and interstates,” he noted.

The $2.3 million project is the first phase of statewide installation of the wrong way detection system, with the agency planning further expansion for the remainder of the I-40 corridor through Central and Western Oklahoma to the Texas state line, as well as I-35 from Kansas to Texas.

Several state departments of transportation have already installed similar technology on roadways under their purview.

In January 2019, the Nevada Department of Transportation installed and activated a wrong-way driver detection and alert system on U.S. 395 based on radar and closed-circuit cameras that automatically detects vehicles entering a highway in the wrong direction, activating two sets of red flashing wrong-way signs on the ramp.

The Arizona Department of Transportation deployed a first-in-the-nation thermal-camera wrong-way vehicle alert system in the Phoenix area in 2017; a system that received a national award in 2018. The agency is also enhancing and expanding its wrong-way driver detection system to other highway corridors statewide.