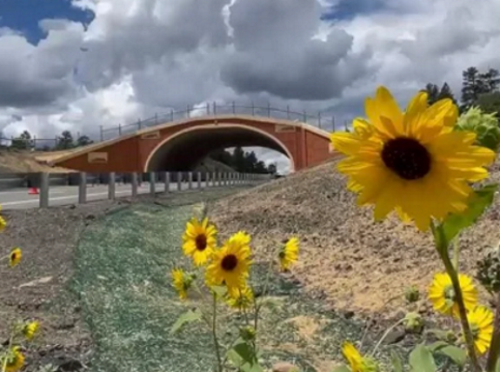 The Colorado Department of Transportation recently completed the state’s newest wildlife overpass and underpass on U.S. Highway 160 in the southwestern part of the state, celebrating the accomplishment with a ribbon-cutting event.

The agency said this wildlife mitigation project would enhance safety for this section of the highway by promoting safer travel for motorists, enhancing the safer movement of wildlife, and reducing wildlife-vehicle collisions.

To date, Colorado DOT said it has built more than 60 wildlife mitigation structures crossing above or under highways throughout the state. Additionally, it has installed 400 miles of high big game fencing along state and U.S. highways or next to the interstates.

The agency noted that its planning and environmental division expects to continue incorporating wildlife mitigation features into future highway projects.

The agency added that “collaborative efforts” helped make the construction of this and other wildlife mitigation projects in Colorado, more feasible. For example, the Southern Ute Indian Tribe provided support with critical Global Positioning System data that identified seasonal migration patterns and habitat for mule deer and elk in the San Juan Basin area.

“Nineteen years ago the tribe deployed its first set of GPS radio collars on mule deer,” said Aran Johnson, Southern Ute tribal wildlife biologist, in a statement. “The results of those collars hinted at the importance of this particular spot and stretch [of roadway] as a migratory crossing point [for big game] on Highway 160.”

Meanwhile, a research document recently released by an international pool funded study led by the Nevada Department of Transportation provides an “authoritative review” of the most effective measures to reduce animal-vehicle collisions, improve motorist safety, and build safer wildlife crossings.

With as many as two million collisions with large mammals in the United States leading to approximately 200 human deaths every year, the review compiled, evaluated, and synthesized studies, scientific reports, journal articles, technical papers, and other publications from within the United States and beyond to determine effectiveness of 30 different mitigation measures.