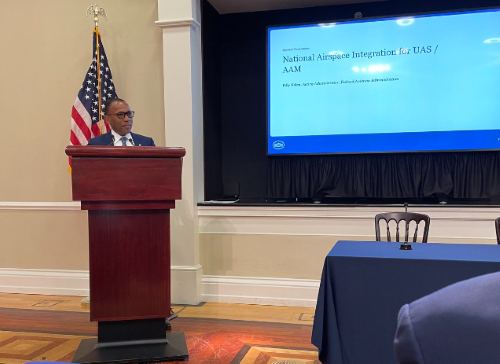 Billy Nolen (seen above at podium), acting administrator of the Federal Aviation Administration, noted at a White House summit on Advanced Air Mobility or AAM that his agency “aims to be a gateway, not a hurdle” to this new form of aviation service.

In his remarks at the summit, Nolen said AAM “has the potential … to enable more transportation options that are more efficient, more sustainable, and more equitable, while creating thousands of great jobs in the process.” However, he stressed that “if the public is not confident in their safety,” those benefits might “never be realized.”

That is why Nolen said the FAA’s “comprehensive integration strategy” for drones and AAM aircraft – developed in concert with other federal agencies, such as NASA, Homeland Security, and the Department of Defense – should result in what he called “consensus safety standards” for those new aviation technologies.

All of those efforts are enabling FAA to “execute an integration strategy for new airspace entrants” in which the more complex or higher risk posed by the operation results in a higher the level of safety.

“Simply put, that means that aircraft operations that carry people are going to require a higher level of performance and oversight than those that don’t carry people – period,” Nolen explained.

“Through AAM, we could potentially see electric powered air taxis land in your city, and transport you across town or maybe to the airport in just minutes, whereas the same trip by car would have taken much longer,” he said.

“AAM aircraft could also transport large cargo, or help with firefighting, air ambulance and search & rescue operations,” Nolen noted. “And AAM could eventually be a more equitable form of transportation, [with] the potential to connect underserved and rural communities with larger cities. This could be especially beneficial for communities that are reliant on aviation, like in Alaska.”

As a result, AAM has “unique qualities” compared to traditional aviation, forcing the FAA to “think differently,” Nolen said.

“For example, aircraft pilots are traditionally required to communicate with air traffic controllers. But what if the software that enables an autonomous vehicle to remain aloft also allows it to safely separate itself from other aircraft? As safety regulators, it is the job of the FAA and its counterparts around the world to help ensure that innovation doesn’t come at the expense of safety,” he stressed.

“We must see safety as an enabler, because nothing will ground these innovations faster than incidents or accidents,” Nolen added. “And just like with drones, we are learning about and addressing local community concerns about AAM operations in and around metropolitan areas. For this effort, we’re engaging with state, local, and tribal governments. This industry is writing and rewriting the history of aviation in real time, and we have the opportunity to lay the foundation for the decade ahead while inspiring the next generation.”