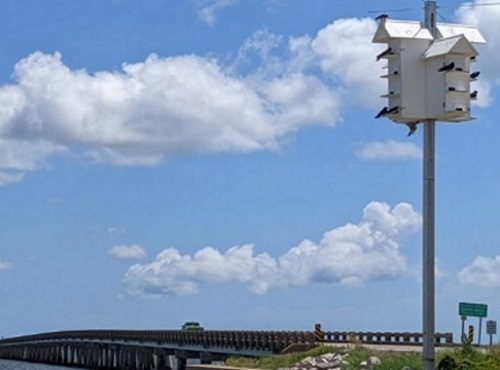 Across the country, state departments of transportation regularly support to a wide variety of efforts aimed at protecting numerous wildlife species and their habitats.

For example, in July and August every year, the North Carolina Department of Transportation temporarily lowers speed limits from 55 mph to 20 mph on the William B. Umstead Bridge – locally known as the old Manns Harbor Bridge – at dusk and dawn during the roosting period of purple martin bird flocks.

NCDOT noted in a statement that it has collaborated with the Coastal Carolina Purple Martin Society since 2007 to educate the public about the purple martin flocks, to protect both the birds and motorists.

From late July through August, the west end of the bridge becomes home to as many as 100,000 purple martins as they prepare for their annual migration to Brazil. The birds roost under the bridge at night, departing at dawn to feed and returning at sunset. The flock is so large during its peak that it is visible on radar.

On a broader basis, NCDOT initiated a mitigation program in April operated by its Division of Aviation to reduce the risk of wildlife hazards by providing a variety of training and support options for both airports and aircraft.

The agency said North Carolina airports average at least one bird or other wildlife strikes upon aircraft per day, which can cause significant damage. For example, in 2018, aircraft landing at a general aviation airport sustained more than $800,000 in damage when it struck two of six white-tailed deer crossing the runway.

“Flocks of birds taking flight, deer crossing runways and other such hazards can cause serious damage to property and even loss of life,” noted Rajendra Kondapalli, the program’s manager, in a statement. “Our program focuses on reducing that risk and increasing safety for aircraft that fly in and out of airports across our state.”

Meanwhile, the Idaho Transportation Department helped Girl Scout Troop 1806 and the Idaho Department of Fish and Game or IDFG install homemade birdhouses near the US-95 McArthur Lake project south of Naples.

ITD Project Manager Carrie Ann Hewitt has consulted IDFG biologists through the design of the project, which includes realigning one mile of the highway near the lake to make the existing curves safer for drivers and to elevate the highway where it dips down to the water.

Elevating US-95 will also allow wildlife to pass underneath to access the IDFG McArthur Lake Wildlife Management Area, ITD noted in a statement.

The agency expects to start construction on this roadway project in 2023 and 2024, with tree thinning starting in 2022 to prepare for the road’s realignment.

Hewitt – a co-leader for the Girl Scout troop – has been researching the habitat needs of the mountain bluebird, flocks of which resides near the project, and reached out to IDFG to see about improving its habitat.

“Mountain bluebird populations are struggling,” Hewitt noted. “The girls found that cowbirds actually swap out eggs with the bluebirds, and the bluebirds unknowingly hatch the wrong offspring.”

The troop built 18 birdhouses with entrances too small for the cowbirds to prevent that from happening, with IDFG suggesting that they install them near McArthur Lake due to the recent thinning, along with another site near Boundary Creek.