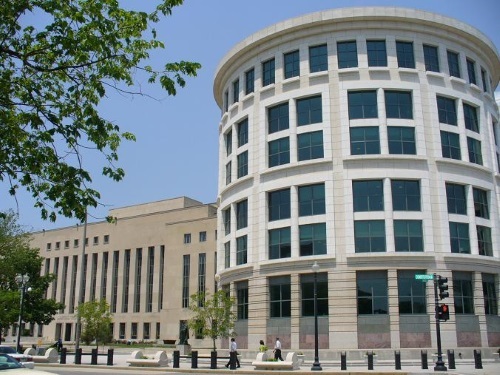 The District of Columbia Circuit Court has dismissed a lawsuit filed by the American Association of State Highway and Transportation Officials and the Intelligent Transportation Society of America in 2021 to prevent the Federal Communications Commission from reallocating swaths of the 5.9-gigahertz (GHz) wireless communication spectrum to non-transportation uses.

[Above photo by the D.C. Circuit Court]

ITS America and AASHTO filed that lawsuit to ensure vehicle-to-everything or V2X technologies can continue safely operating throughout the 5.9 GHz band.

Filed in the D.C. Circuit Court, the lawsuit sought to reverse the November 2020 decision by the FCC to shift 60 percent of the 5.9 GHz spectrum to unlicensed, non-transportation uses, while also preserving the full 75-megahertz (MHz) band within the overall 5.9 GHz spectrum for transportation communications. In a 2020 letter, leaders of the House of Representatives Transportation and Infrastructure Committee criticized FCC’s decision to reallocate this spectrum.

However, on August 12, the D.C. Circuit Court dismissed the lawsuit in a 15-page opinion that validated the FCC’s approach to reallocating those spectrum bands.

“We agree that the FCC does not control intelligent transportation systems. But it has a statutory duty to allocate the spectrum to its best use. And figuring out how much of the spectrum is needed to support a particular activity is exactly what the FCC does,” the court noted in its opinion. “Sometimes that involves analyzing the technical features of a spectrum use to figure out what range is actually needed, as the FCC did here.”

In a joint statement, AASHTO Executive Director Jim Tymon and ITS America President and CEO Laura Chace expressed their disappointment with the ruling.

“[This] decision reallocating a majority of the 5.9 GHz spectrum is a blow to transportation safety for all Americans,” they said. “At a time when roadway deaths are at an all-time high, our efforts to preserve the entire 75 MHz spectrum for connected vehicle safety solutions demonstrate the industry’s commitment to saving lives. We are disappointed and frustrated that the FCC and the Court disregarded our collective expertise and feedback, ignoring the importance of transportation safety and ignoring the importance of using these technologies to stop the public health emergency on our nation’s roadways. The FCC instead continued to prioritize economic interests over public safety.”

In addition, ITS America’s “Future of V2X Working Group” continues to press forward on efforts to develop strategies for deploying lifesaving V2X technologies under a new paradigm. AASHTO has also been working with its members to further the readiness, deployment, and integration of V2X technologies on public roadways.

AASHTO’s Tymon also noted that the U.S. Department of Transportation will need to play a greater role in ensuring safety is not compromised by the FCC’s spectrum reallocation effort.

“We should now turn our attention to fully utilizing the remaining spectrum and other communications technology for transportation safety and ITS uses,” he said. “We are encouraged by USDOT’s recent attention on V2X technology but they need to continue to prioritize these efforts and provide regulatory certainty to facilitate V2X deployments and address the spirit of the still-pending National Highway Traffic Safety Administration rule proposed in 2017 on vehicular communications.”

Tymon also argued in previous statements that, “the leaders of all 50 state DOTs, the District of Columbia, and Puerto Rico are unanimous in their support for preserving the 5.9 GHz wireless spectrum for transportation-only usage.

“Without the full 5.9 GHz spectrum available to use for connected vehicle technologies it will be significantly more difficult to eliminate the kinds of vehicle crashes that contribute to more than 37,000 fatalities on America’s roadways each year, as well as the safe deployment of connected and automated vehicles,” he said.

Tymon made the same points in several missives for more than a year to the FCC, Congress, and even the White House.

“The 5.9 GHz band has been part of the spectrum that has been reserved for use for life-saving transportation technologies,” he emphasized. “At a time when we are trying to get to zero traffic fatalities, the FCC should stay the course and not give up the spectrum that the transportation community has been counting on – and has already made considerable investments in – to help save lives.”