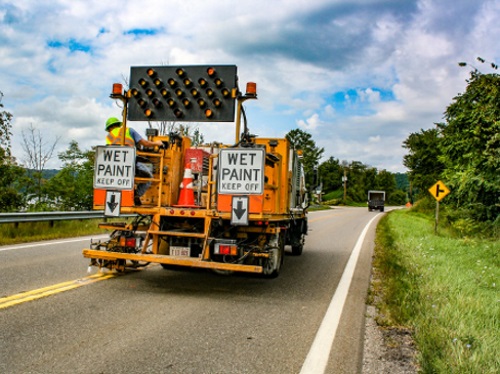 Under the final rule, the agency said the Manual on Uniform Traffic Control Devices for Streets and Highways or MUTCD would provide a new “minimum standard” for pavement marking “retro-reflectivity” that goes into effect on September 6.

FHWA said retro-reflective material reflects light more effectively back to the observer, making pavement markings that include them brighter and more easily seen in dark conditions.

The rule is also expected to help reduce crashes by enhancing the ability of advanced driver assistance and autonomous vehicle technologies to identify pavement markings more readily, the agency said.

“Our number one goal is to reduce highway fatalities and serious injuries wherever and whenever they occur,” noted Acting FHWA Administrator Stephanie Pollack in a statement.

“This rule will save lives by helping those traveling see pavement markings more clearly and know what lies ahead, especially in darkness and other instances when visibility is critical,” she added.

The MUTCD – the national standard for traffic control devices used on all streets, highways, bikeways, and private roads open to public travel – currently requires that pavement markings be visible at night and that all markings on interstate highways be retro-reflective but does not require a minimum level.

By creating one, FHWA believes state and local transportation agencies can reduce the number of severe crashes that happen in dark, unlighted conditions and result in an annual nighttime fatality rate that is roughly three times the daytime fatality rate.

The final rule also requires state and local agencies or officials to implement a method within four years for maintaining retro-reflectivity for pavement markings at or above minimum levels. Pavement marking improvements are also eligible for up to 100 percent federal-aid funding, the agency said.