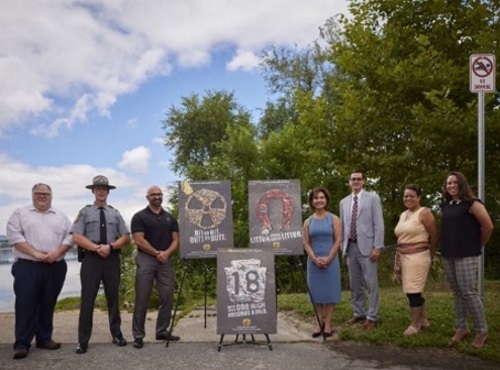 The creation of this campaign is one of the many recommendations made by Pennsylvania’s first-ever Litter Action Plan, released in December 2021. That plan also won a Pennsylvania Governor’s Awards for Excellence in May.

“Every Litter Bit Matters” seeks to get state residents to ensure every piece of their trash, regardless of size, is disposed of properly as research shows only 3 percent of Pennsylvanians approve of littering, yet 40 to 50 percent of them admit to littering roadways and other public areas.

“Every Litter Bit Matters” also seeks to educate state residents about “situational littering,” such as leaving trash on the ground next to a full can or in a stadium, as well as reminding them that litter of all sizes stacks up and creates problems.

PennDOT noted that a 2019 Litter Research Study found that Pennsylvania has more than 500 million pieces of litter on its roadways, with more than 85 percent of those pieces measuring less than four inches in size. That study also found that litter-related cleanup costs currently total around $350 million each year.

“As a commonwealth we recognize we need to change behavior, not just clean up the mess,” noted PennDOT Secretary Yassmin Gramian in a statement. “With our collective efforts and this litter-prevention campaign we are confident we can reduce litter in Pennsylvania.”

“Litter isn’t just ugly to look at. It can cause environmental contamination and put public health at risk,” added Ramez Ziadeh, acting secretary for Pennsylvania’s Department of Environmental Protection. “Litter can leach chemicals into our land and water, and act as breeding grounds for mosquitoes that carry West Nile Virus.”

The campaign also features a new Young Ambassadors Program – formed as part of a new partnership between PennDOT and Keep Pennsylvania Beautiful or KPB – that aims to involve rising 10th- through 12th-grade students to help with the state’s litter clean-up plans.

The students – chosen through a competitive process – will commit to nine months of service in representing and upholding the mission and values of KPB. Other responsibilities include attending a virtual orientation, four virtual education and training workshops, and up to two virtual networking events, organizing and participating in at least one community cleanup event through Pick Up Pennsylvania, conducting one community education event targeting youth in the student’s community and promoting participation on social media.

From September 2022 through May 2023, Young Ambassadors will build community stewardship by inspiring, engaging, and empowering Pennsylvanians to keep their communities clean and develop civic leadership to advocate for clean and beautiful communities across Pennsylvania, PennDOT added.

Pennsylvania’s new anti-litter campaign is one of several similar state-level efforts recently initiatives in different parts of the country.

In July, Ohio launched a new litter control program launched, one administered by the Ohio Department of Transportation, that seeks to broaden engagement by the business community in its trash removal efforts.

That new Ohio program allows businesses and groups to fund litter removal services along one-mile, one-direction segments of state highways. In exchange for their sponsorship, Ohio DOT displays the name of the business or group on a sign within their sponsored segment.

Meanwhile, the Texas Department of Transportation recruited popular singer, songwriter, and actor Joe Jonas to star in a series of Public Service Announcements as part of the agency’s “Don’t Mess with Texas” anti-littering campaign.

The agency said the “show-stopping” performer – a former Westlake, Texas, resident – takes an “over-the-top” approach in the PSAs to remind folks to keep Texas roadways free of litter.