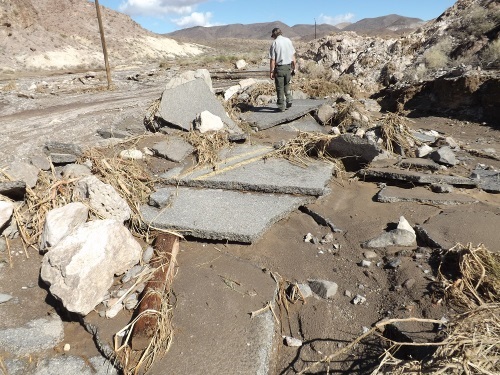 The Federal Highway Administration has issued $11.7 million in “quick release” emergency relief or ER funds to the National Park Service or NPS to offset costs of infrastructure repair work due to flood damage in Death Valley National Park.

[Above photo by the NPS]

“The emergency funding we’re sending will help quickly reopen roads and remove storm debris in Death Valley and improve access in and around the park for workers, visitors and the surrounding community,” said Pete Buttigieg, secretary of the U.S. Department of Transportation, in a statement.

Death Valley National Park has approximately 1,000 total miles of roads, including 200 miles of paved roadways. The storm that took place in the park on August 5 set a new rainfall daily record, with totals equivalent to almost an entire year’s worth of precipitation in a few hours causing extensive serious damage to roads, buildings, and utilities.

The flooding closed all routes within the park due to extreme debris on the roads, with sections of major roadways completely wiped out.

FHWA said those “quick release” ER funds are an “initial installment “of funds toward restoring this essential transportation link. The agency said additional funds needed to repair damages within the park would come through nationwide funding allocations. FHWA added that it is also providing technical assistance, conducting site assessments, and administering emergency contracts for the NPS.

[Editor’s note: FHWA also recently issued $100 million in grants to fund two projects in Alaska and Mississippi, along with making $125 million in new funding available for its Nationally Significant Federal Lands and Tribal Projects program through a notice of funding opportunity. For more information on both of those FHWA funding moves, click here.]

The NPS as well as several state departments of transportation received ER funds earlier from FHWA to deal with the damage caused by a similar flooding event that occurred in nearby Yellowstone National Park in early June.

Unprecedented amounts of rainfall in early June caused substantial flooding, rockslides, and mud slides within the north half of Yellowstone and southern Montana – including Gardiner, Livingston and Red Lodge – as well as parts of Wyoming.