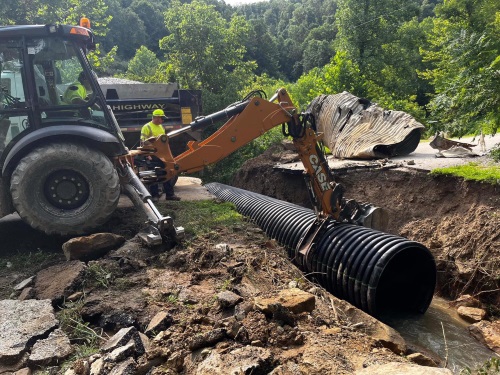 The Kentucky Transportation Cabinet is working as fast as possible to both clean up and remove debris left behind in the wake of major floods in the eastern part of the state while repairing damaged local and state bridges in the process.

“We are taking a giant stride toward recovery from this disaster,” noted Governor Andy Beshear (D) in a statement. “Though much hard work lies ahead of us, the start of debris removal is a major step toward helping our fellow Kentuckians, who have suffered so much, recover and rebuild.”

Through a competitive bidding process, national firm AshBritt received a contract from the Kentucky Transportation Cabinet to remove debris from state right-of-way in the 13-county area of eastern Kentucky ravaged by the flooding. Eleven out of 13 local governments opted to join in the contract so AshBritt could clear debris from local roads as well, KYTC Secretary Jim Gray noted.

“We stand ready to take a load off the shoulders of the local governments in the flood disaster area,” he said. “Removing debris not only helps remove safety hazards along roadways and households, it’s a key step in the road to recovery as Kentuckians seek a fresh start from the aftermath of the storms.”

Concurrently, KYTC is beginning to replace the first batch of closed bridges damaged or destroyed by that flooding. The first 11 bridges initially targeted serve county and state roads in four counties. In most cases, residents lost motor vehicle access to their homes when flooding knocked those bridges out of commission.

“The flooding in Eastern Kentucky left more than two dozen public bridges and many, many more private crossings damaged, destroyed or otherwise impassable,” said Gov. Beshear in a separate statement.

“These bridges provide critical access to homes and communities. Right now, numerous families [must] walk across creeks, storm debris, and damaged bridges to bring in food and supplies or to access healthcare,” he said. “Teams are literally building bridges to keep anyone from being cut off from their communities.”

KYTC is using existing and emergency contracts to cover bridge construction, demolition, site survey, and design services. To date, teams have mobilized to all 11 sites and are beginning to construct temporary crossings – referred to as “onsite diversions” – to restore vehicle access to homes until they construct new bridges. The temporary crossings typically consist of culvert pipes overlaid with a hard packed roadbed.

Meanwhile, KYTC engineers are in the initial design stages for new bridges and working with concrete and steel beam manufacturers to secure materials needed to rebuild rapidly.

“We are moving with unprecedented speed to get roads passable,” said KYTC’s Gray. “We are utilizing every tool the state can access to get people back in their homes. We are in this for the long haul and won’t quit until we have built back what was lost to this tragic event.”

Other state departments of transportation in the region have also been engaged in similar flood recovery efforts.

For example, work crews from the West Virginia Division of Highways – part of the West Virginia Department of Transportation – continue assessing and repairing flood damaged areas, particularly in Fayette and Kanawha Counties, where Governor Jim Justice (R) declared a state of emergency for excessive rainfall that occurred overnight on August 15.

“It’s been a tough six week period,” said Joe Pack, deputy state highway engineer, in a statement. “We’ve had one area hit after another, with all the rains we’ve had.  Some areas have been hit which don’t typically see high water. For our crews, it has been continuous.”

The August 15 rainfall was one of several events that caused damage to roads, culverts, and bridges in a multi-county area. WVDOT crews continue to work to repair damage from earlier rain events throughout the region.

“What they’re running into is a soupy material,” noted Jim Moore, WVDOT District 9 engineer, in a separate statement. “The area is so saturated that, as they’re clearing away the debris, it’s like working through mud soup.”