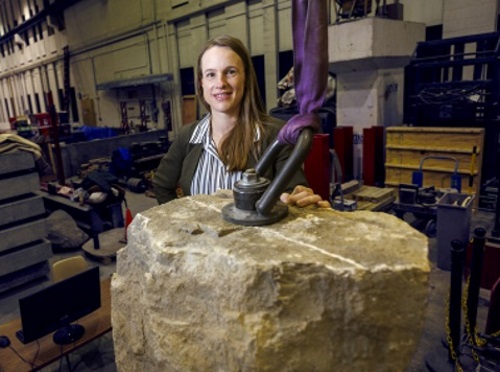 Christine Wittich (seen above), assistant professor of civil and environmental engineering at University of Nebraska–Lincoln researcher, is leading a national effort to gather information on how state departments of transportation use social media during emergencies – with an eye toward developing a “best practices” guide to improve crisis communications.

[Above photo by Craig Chandler for the University of Nebraska-Lincoln]

The study focuses on state DOT social media use during emergencies ranging from natural disasters to civil unrest to large traffic jams, said Wittich, who serves as the principal investigator for the yearlong project. A $45,000 grant from the National Cooperative Highway Research Program through the National Academy of Sciences provides fiscal support for this study, she added.

Wittich – whose research focuses on analysis and design of structures to improve resilience to natural hazards and extreme events – noted in a news release that state DOTs have a variety of policies and protocols for dealing with emergencies at their disposal. However, she stressed that there is “considerable variability” in how they might use social media at key times as it can be essential in detection of emergencies, damage assessment, and evacuation plans.

“Different states leverage it in different ways,” she explained. “There’s a two-way street with social media during emergencies. There is getting information out to the public. [Many] states are excellent at that. But we are also looking at how agencies are looking at what’s coming in from social media – harvesting and leveraging the social media data.”

That might include vetting such information for accuracy, then figuring out how to use it so it is useful to the public, she said.

Wittich’s project will document the social media practices of state DOTs during emergencies across the country. Information the researchers are looking for includes:

Wittich said her project would collect information via literature reviews, state DOT surveys, and follow-up interviews with selected agencies for the development of case examples. She’ll then identify information gaps and suggest further research to address those gaps.