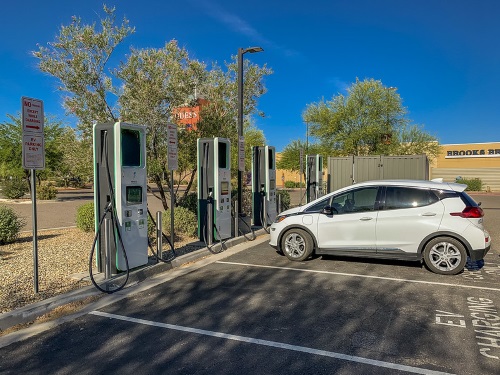 The American Association of State Highway and Transportation Officials sent a 13-page letter to the Federal Highway Administration on August 20 providing feedback on the agency’s National Electric Vehicle Infrastructure or NEVI formula program proposed rulemaking, issued back in June.

[Above photo by Arizona DOT]

The group noted that AASHTO and state DOTs “readily support” the Biden administration’s ambitious goal of building a new national network of 500,000 electric vehicle or EV chargers by 2030, funded in part through the $1.2 trillion Infrastructure Investment and Jobs Act or IIJA enacted in November 2021.

[Editor’s note: That sentiment dovetails with a memorandum of understanding or MOU signed in February between AASHTO, the National Association of State Energy Officials, the U.S. Department of Transportation, and U.S. Department of Energy to coordinate nationwide investment in EV charging station infrastructure.]

“We will do our part to ensure that the NEVI Formula Program sets up the EV infrastructure industry for long-term success in achieving important environmental outcomes as directed by Congress,” AASHTO said in its letter. “In pursuit of this shared goal, we ask that the proposed regulations recognize differing local needs, such as grid capacity and EV adoption levels, and industry constraints, such as the lack of materials compliant with current and anticipated Buy America requirements.”

AASHTO noted that all 50 states, the District of Columbia, and Puerto Rico submitted EV infrastructure deployment plans required to unlock the first round of $5 billion in formula funding provided through the IIJA by August 2.

However, the group stressed in its letter that long-term operation and maintenance of that infrastructure should not be a state DOT responsibility, just as state DOTs do not operate or maintain gasoline or diesel fueling infrastructure today.

“The NPRM [notice of proposed rulemaking] seems to assume that state DOTs will own and operate the charging stations installed through the NEVI Program. This is likely not the case; many of these requirements will be passed on to third-party vendors or contractors,” AASHTO said.

“We ask that the proposed regulations establish a process by which state DOTs can seek and receive specific exceptions to the requirements, in line with the exception template provided on the website of the Joint Office of Energy and Transportation, but with expanded exception options,” the group said.

“For example, in very rural areas where it is unlikely that four vehicles will need to charge simultaneously, a state DOT might seek an exception that would allow power-sharing between charging ports,” AASHTO explained. “This would allow the ports to achieve 150 kW [kilowatts] but would not require costly grid upgrades to equip the charging station to provide 600 kW.”