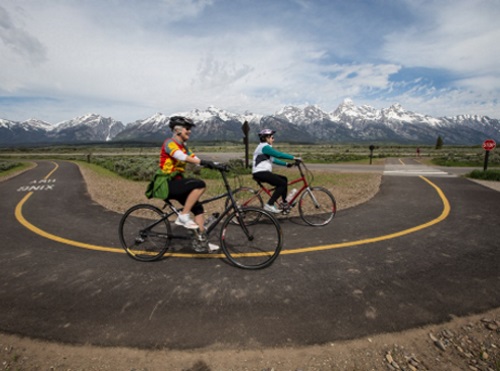 [Above photo by the National Park Service]

Primarily known for its epic long-distance routes like the TransAmerica Trail and Great Divide Mountain Bike Route, Adventure Cycling produced its “short routes” guide for those new to bicycle travel or those with less time. Those routes are free via digital formats that can be loaded onto smartphones and GPS devices, or printed as paper maps and cue sheets. For more information, click here.

“Since the release of the TransAmerica Trail in 1976, we’ve mapped more than 50,000 miles of bike routes across the U.S. and into Canada – but recognizing that they aren’t for everyone, we’ve produced these new Short Routes,” said Nathan Taylor, cartographer for Adventure Cycling, in a statement.

“While many of our epic routes can take weeks to ride in full, ‘short routes ‘are two- to five-day itineraries from cities like Los Angeles, Seattle, Minneapolis, Austin, Atlanta, and Philadelphia,” he added.

“There are loops that start and end at the same point, out-and-back options and routes that can be combined with public transit like ferries, trains and buses. They are a fun, accessible way to get out and explore at the pace of a pedal stroke. And, best of all, they’re free,” Taylor noted.

In this one-hour webinar, the group plans to dive into efforts to expand the U.S. Bicycle Route System or USBRS into a national network for long-distance bicycle travel. To register for this webinar, click here.

Adventure Cycling added that it would not record the November webinar, which is limited to 40 participants. By contrast, in December, Adventure Cycling plans to hold a second webinar on the USBRS for a wider audience – mainly for any person or group considered a stakeholder in the USBRS designation process – with an unlimited audience size.