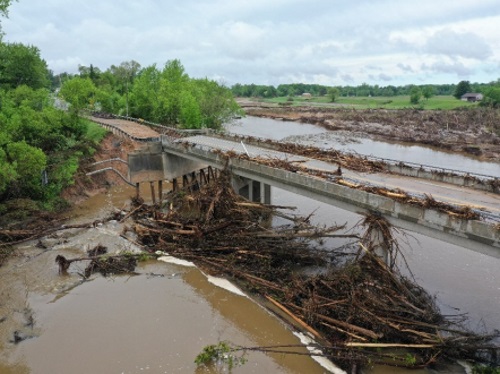 The Federal Highway Administration is providing $513 million in emergency relief or ER program funds to help 30 states, the District of Columbia, and Puerto Rico make repairs to roads and bridges damaged by weather-related events that have occurred in recent years.

[Above photo via the Michigan Governor’s Office]

FHWA said in a statement that the bulk of its ER funding goes toward reimbursement for states, territories, federal land management agencies, and tribal governments to fix and restore roads and bridges in the aftermath of wildfires, hurricanes, flooding and other weather-related events, including Hurricane Ida damage in several states and California wildfires.

The agency said additional funding is available to repair or replace structures due to catastrophic failure from external causes – such as the pedestrian bridge in Washington, D.C., over Route 295 that collapsed when a truck hit the bridge in June 2021.

FHWA also noted that the $1.2 trillion Infrastructure Investment and Jobs Act enacted in November 2021 seeks to improve transportation infrastructure resiliency in the future through the new Promoting Resilient Operations for Transformative, Efficient, and Cost-saving Transportation or PROTECT program. The PROTECT program will advance the use of materials and structural techniques to ensure highways are better prepared to withstand extreme events, the agency noted.

FHWA added that it is taking “additional steps” by updating its Emergency Relief Manual for 2022 to spotlight the program’s impact on improvements to system resilience. The agency has also embarked on a rulemaking to amend the FHWA ER program regulations to incorporate climate resiliency while making it possible to use more ER funds toward improving system resilience.

The agency noted this specific $513 million fiscal year 2022 allocation provides funding for continued repairs from the 2015 and 2016 winter storms in California, 2017 Hurricanes Irma and Maria, 2020 spring flooding in Michigan, as well as recent Arkansas flooding and Alabama tornadoes.

This is the second ER program allocation in FY 2022, the agency noted, following a $1.4 billion allocation made in December 2021. That brings FHWA’s total disbursement of ER funds to more than $1.9 billion.

As an example of what these ER funds cover, Michigan Governor Gretchen Whitmer (D) recently detailed how the $50 million her state is receiving from FHWA for emergency road and bridge repairs will go to work following dam failures and flooding two years ago.

“In 2020, after historic flooding and dam failures, we took action to fix impacted roads and bridges, and I am grateful that Michigan is getting that money back,” she said in a statement.

The governor noted the flooding wrecked nearly 30 roads and bridges across the mid-state region, with three bridges in Midland and Gladwin counties all within a two-mile distance of one another washed away following the extreme flooding.