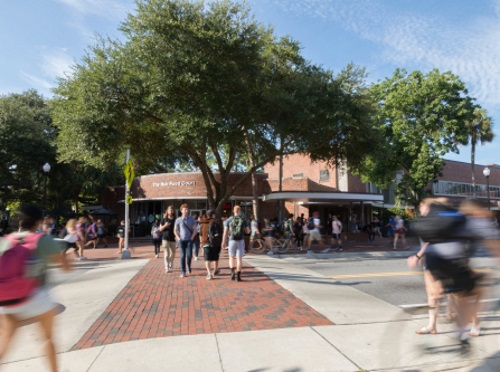 A team of researchers from the University of Florida Transportation Institute or UFTI, in collaboration with the Florida Department of Transportation and campus and city partners, plans to study a suite of emerging technologies that provide more “timely warnings” regarding potential collisions between motorists and pedestrians, reducing injuries and fatalities.

[Above photo by the University of Florida]

This yearlong research project – led by Lily Elefteriadou, director of UFTI – will install sensors along Gale Lemerand Drive and Stadium Road in the heart of campus that can detect pedestrians and vehicles.

Notification systems, including both alerts in vehicles and a smartphone app for pedestrians and cyclists, will share information about upcoming hazards via this connected vehicle infrastructure.

“This is a unique collaboration between our university, the city and the Florida DOT that is creating a living lab, which means the testing happens on real roads,” Elefteriadou said in a statement. “In realistic settings we will get to study more naturalistic behavior. There is no replacement for that.”

She added that the university provides the “ideal location” to study connected vehicle infrastructure because of the diversity and complexity of transportation on a college campus.

“We have a good amount of pedestrian and bicycle traffic. We have e-scooters, cars and the bus system. You get all of this in one place and you don’t have to go study different things in different places,” said Pruthvi Manjunatha, one of the project’s leaders and manager of the I-STREET Living Lab at the school – and advanced traffic research center within UFTI that is running the study.

While autonomous vehicle technologies have received “a lot of attention” for their ability to reduce conflict between cars, Manjunatha said connected vehicle infrastructure promises to reduce accidents between everyone who uses a street, pedestrians included. That is because, instead of focusing only on drivers, connected infrastructure aims to capture the behavior, and prioritize the safety, of all road users, he said.

“Even if we have the tech, it’s the way we deliver the message that makes all the difference. If we can find the optimum mode of message delivery, that’s going to be a game changer,” Manjunatha emphasized. “Whoever the road user is, ideally these alerts should help them make better decisions.”

In focus groups and at real street crossings, Elefteriadou’s team plans to evaluate how pedestrians and cyclists use the smartphone app to receive warnings. The researchers will also study how drivers respond to dashboard alerts sent from roadway sensors. That information will help the scientists tweak the alerts to encourage consistent use.

Concurrently, many state departments of transportation are funding a variety of projects and initiatives that seek to improve pedestrian safety, along with that for other modes of travel.

For example, the New Jersey Department of Transportation recently began work on a Pedestrian Safety Improvement project along the Route 129 corridor in the City of Trenton.

That project includes both short-term improvements and long-term solutions to improve safety for both pedestrians and cyclists at three signalized intersections on Route 129, at Lalor Street, Cass Street, and Hamilton Avenue.

Additional improvements include revising the traffic signal timing at each intersection to provide pedestrians more time to cross, adding signal back plates to increase visibility, and installing upgraded, advanced warning signs over the roadway to replace ground-mounted signs.

The NCDOT Multimodal Planning Grant program, now in its 20th year, helps North Carolina communities develop a comprehensive strategy for expanding bicycle, pedestrian and transit facilities, as well as improve the safety of the state’s transportation network for all users.

To date, approximately $8 million has been awarded for 254 plans in 248 municipalities and six counties through this NCDOT grant program.