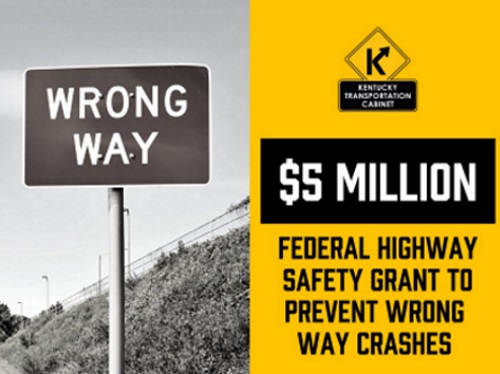 That funding is part of a combined $49.2 million in technology grants recently issued by the Federal Highway Administration and Federal Transit Administration through two separate yet related programs to improve “mobility and multimodal connections” for those using the U.S. highway and transit systems.

KYTC said its “Wrong Way Driving and Integrated Safety Technology System” would use “cutting-edge” computing and video processing to implement a pilot program aimed at detecting and deterring wrong-way incidents by alerting the wrong-way driver, other drivers, and emergency responders.

Additionally, the system will improve existing intelligent transportation systems to monitor and detect other safety concerns related to pedestrians, debris and halted vehicles on the roadway.

Between 2015 and 2020, Kentucky experienced 88 wrong-way driving crashes, where a driver used an off-ramp in the wrong direction. Those 88 crashes resulted in 16 fatalities and 27 serious injuries.

“Wrong-way driving is a major safety challenge, not only in Kentucky, but also throughout the United States,” said Governor Andy Beshear (D) in a statement. “These funds will allow us to use innovative video technology to help monitor and bolster safety on corridors prone to these types of incidents.”

“Improving highway safety is a core focus of the Transportation Cabinet,” added KYTC Secretary Jim Gray. “These funds will allow the KYTC to utilize the latest in technological advancements to help prevent crashes, injuries and fatalities on our roadways.”

KYTC added that it plans to integrate existing digital and roadway signage into a “comprehensive system” that will include additional signs, cameras, sensors, and other equipment purchased with the grant funds.

The agency plans to identify locations for its wrong-way driver detection system based on crash history and ramp design on Interstate ramps in Fayette and Jefferson counties as most wrong-way crashes occur in these areas, with the potential to expand to other counties throughout the state.

“Roadway infrastructure improvements are part of a comprehensive effort to curb these tragic events,” Gray pointed out. “In addition to implementing this new technological system, we’ll continue researching statewide opportunities to address wrong-way crashes, such as striping and signage. While our existing signage and markings meet federal requirements, we’re looking at how to enhance visibility and uniformity at every off-ramp.”

In July, the Oklahoma Department of Transportation began pilot testing a wrong way detection and alert system on six ramps along I-40 in the eastern part of the state. Using thermal cameras, the system identifies when a vehicle enters an exit ramp in the wrong direction and displays flashing lights on already posted Wrong Way signs to increase noticeability.

In January 2019, the Nevada Department of Transportation installed and activated a wrong-way driver detection and alert system on U.S. 395 based on radar and closed circuit cameras that automatically detects vehicles entering a highway in the wrong direction, activating two sets of red flashing wrong-way signs on the ramp.

The Arizona Department of Transportation deployed a first-in-the-nation thermal-camera wrong-way vehicle alert system in the Phoenix area in 2017 – a system that received a national award in 2018. The agency is also enhancing and expanding its wrong-way driver detection system to other highway corridors statewide.