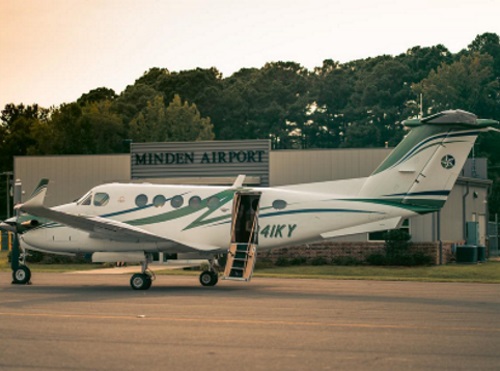 The aviation division of the Louisiana Department of Transportation and Development recently unveiled a new program aimed at boosting tourism to Louisiana airports.

[Above image via Minden Airport]

The new Louisiana Airport Passport Program, formerly known as Fly Louisiana, encourages pilots and aviation enthusiasts to visit airports statewide. Participants who sign up for the program’s mobile application and who complete certain incentives have the opportunity to win prizes such as aviation patches, flight bags, shirts, even a flight jacket.

“Other state DOTs across the country have similar programs and have seen much success over the years,” noted Renee Lapeyrolerie, Louisiana DOTD commissioner of multimodal commerce, in a statement. “Everyone can participate in this program, not just pilots. It is our hope to encourage aviation throughout the state and even open the door for others to learn about this exciting industry.”

Any licensed pilot from any state, their passengers, and aviation enthusiast can download and use the Louisiana Airport Passport Program app, which goes live on September 15.

Participants get credit by checking-in to any of the participating public use airports throughout the state, as well as visiting aviation attractions, attending safety seminars and bonus activities that include flying to seaplane bases and visiting out of state airports, to name a few, the agency noted.

“This is an exciting opportunity to connect with pilots and passengers of Louisiana and surrounding states,” emphasized Josh Duplantis, Louisiana DOTD assistant aviation director. “Our focus is on airport infrastructure, and rightly so, but the Louisiana Airport Passport Program offers anyone and everyone the opportunity to engage with Louisiana’s airports and other aviation attractions and collect some pretty sweet rewards while doing it.”

For example, the Illinois Department of Transportation issued an Illinois Aviation Economic Impact Analysis in December 2021, which found that the state’s airports annually contribute $95.5 billion to the state’s economy and support an estimated 492,768 jobs.

“Aviation is a pillar of our state. Its importance to our economy cannot be overstated,” explained Illinois DOT Secretary Omer Osman. “Illinois airports serve as a gateway to the economy through passenger, cargo and general aviation services, as well as employment opportunities. [Illinois DOT] is committed to strengthening our aviation system to better connect Illinois to national and international economies far and wide.”

Several state department of transportation studies – including ones from Georgia, Wyoming, and Alaska – also show that airports function as significant “economic engines” as well as key mobility hubs for businesses and residents.