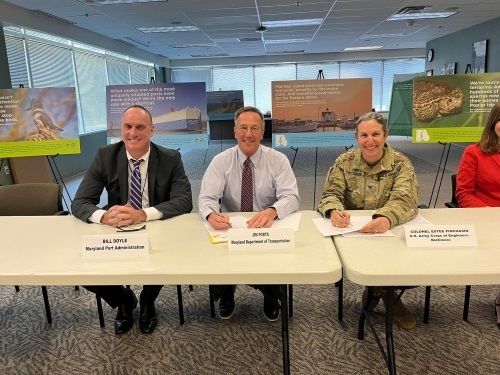 The Baltimore District of the U.S. Army Corps of Engineers and the Maryland Department of Transportation recently signed a Project Partnership Agreement or PPA to work together on the $4 billion Mid-Chesapeake Bay ecosystem restoration project.

The PPA outlines the roles, responsibilities, and financial obligations for both partners for the restoration of both James and Barren islands in Dorchester County, beneficially re-using material dredged from the Port of Baltimore approach channels and the Honga River, respectively.

USACE said it received more than $80 million in funding from the $1.2 trillion Infrastructure Investment and Jobs Act enacted in November 2021 to complete the design and preconstruction activities for this project.

Based on the current schedule, Barren Island may start to accept dredged material as early as 2024 with James Island accepting material sometime in 2030 after finishing construction of dredged material containment facilities at each location.

The Mid-Bay project should wrap up in 2067 – providing more than 40 years of capacity to place almost 100 million cubic yards of dredged material, USACE said.

“It’s an honor to sign this agreement signifying ‘all systems go’ for this critically important project that will provide so many environmental benefits for Maryland,” said Maryland DOT Secretary James Ports Jr., in a statement.

“Rebuilding James and Barren islands will promote wildlife, restore coastal shorelines, and provide us with a long-term placement site for dredged material from port shipping channels, allowing us to accommodate larger ships bringing more cargo and business to Maryland,” he said.

Every year, USACE dredges nearly five million cubic yards of material from the channels and anchorages serving the Port of Baltimore to maintain current depths and widths for safe navigation. Once removed, the material must be contained or disposed of in an environmentally safe manner.

“With this project, we hope to build upon the success of Poplar Island,” said Col. Pinchasin. “The habitat we restored and created using dredged material is flourishing.”

“We are very excited to work closely with Col. Pinchasin and her outstanding team at the Army Corps of Engineers, Baltimore District, on this legacy initiative,” added MPA Director William Doyle.

Concurrently, Governor Larry Hogan (R) announced a “historic agreement” to advance a major dredging project at the Port of Salisbury, with dredged material supporting wildlife habitats near that port.

A new memorandum of understanding between Maryland’s Department of Natural Resources and Wicomico County will provide for 137,000 cubic yards of material dredged from the port for re-use to benefit over 70 acres on DNR’s Deal Island Wildlife Management Area.

That material will help restore wetlands, preserve natural habitats, and protect infrastructure along the Manokin River to keep pace with rising sea levels.

“The dredging material will be beneficially used and re-used, and the project will provide for local wetlands restoration, and the creation of vital wildlife habitat,” the governor said in a statement. “I want to thank our team at the Maryland Department of Natural Resources, along with our partners in Wicomico County, the City of Salisbury, and the U.S. Army Corps of Engineers for working together toward this collaborative solution.”

“As the second largest port in our state, the Port of Salisbury is critically important to our economy, and was at risk due to a severe need for dredging,” said DNR Secretary Jeannie Haddway-Riccio.

“This unique partnership is allowing us to complete this necessary project while using the dredge material to the benefit of our wetlands and wildlife,” she added.