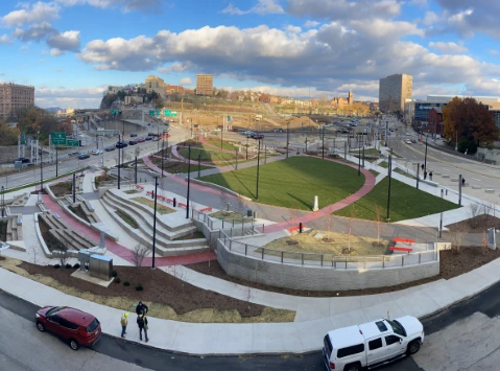 The American Association of State Highway and Transportation Officials recently revealed the Top 12 finalists in the 2022 America’s Transportation Awards competition.

The Top 12 finalists – whittled down from 80 nominees from 37 state DOTs via those four regional contests – now compete for the Grand Prize and the People’s Choice Award. Both prizes come with a $10,000 cash award for a charity or transportation-related scholarship of the winners’ choosing.

“These projects earned the highest scores for making communities safer and people’s lives better by adding bicycle and pedestrian facilities, deploying innovative solutions to improve efficiency, and replacing aging infrastructure with as little disruption as possible,” he added.

“These projects are excellent examples of how state DOTs are delivering more equitable, resilient, multimodal infrastructure for our communities,” Tymon said.

Sponsored by AASHTO, AAA, and the U.S. Chamber of Commerce, this yearly competition evaluates projects in three categories: Quality of Life/Community Development, Best Use of Technology & Innovation, and Operations Excellence. The projects are also divvyed up by size: Small (projects costing up to $25 million), Medium (projects that cost between $26 million to $200 million), and Large (projects costing more than $200 million).

An independent panel of transportation industry experts will select the Grand Prize winner, while the public will decide the People’s Choice Award winner through online voting, weighted to each state’s population to allow for greater competition between states with larger and smaller populations.

AASHTO will announce the winners during its Annual Meeting in Orlando on Saturday, October 22. Online voting in already in progress and ends at 11:59 p.m. on October 21. Cast your vote at AmericasTransportationAwards.org. Individuals can cast no more than one vote per day.

The Top 12 projects in alphabetical order according to their state are: