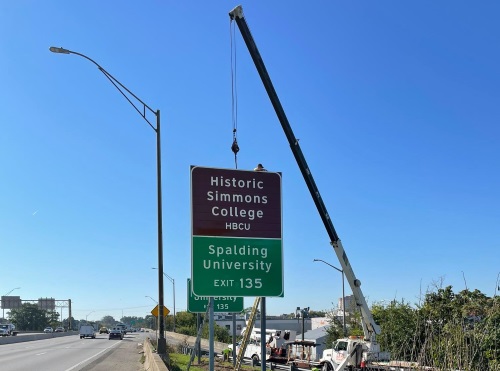 A recent string of copper metal thefts in Louisville has left more than 500 lighting poles dark along several highways – and Kentucky Transportation Cabinet along with other state officials are calling on the public to help catch the culprits and prevent future theft.

Stolen wire stops the flow of electricity, KYTC said, and the agency is collaborating with the Kentucky Department of Homeland Security to spread the word that this activity endangers the public and puts motorists at risk. The high voltage current in these lines may also electrocute would-be thieves, the agency added.

The cost of replacing just wire alone to restore power to those lighting systems ranges from $30,600 to $44,880 before adding in contractor installation costs, KYTC said. While copper wire theft can range from cellular towers to vacant homes, nationally, interstate and highway lighting systems are often targets.

[Editor’s note: Brian Ratliff, deputy executive director and chief engineer for the Mississippi Department of Transportation, talked about how his agency is dealing with similar copper wire theft issues on a recent episode of ‘The Extra Mile’ podcast.]

As a result, KYTC is offering a $2,500 reward for information that will help lead to the arrest and prosecution of those responsible for such thefts.

“Stealing copper is not a victimless crime,” stressed KYTC Secretary Jim Gray in a statement.

“Taxpayers are left holding the bag to pay to replace the stolen wires and repair broken lighting systems. If you see suspicious activity or know of anyone involved in stealing state property, please report it,” he added.

“Even if thieves only steal a portion of the wire, we have to replace the entire length of the wire within the conduit run because the wire can’t be reconnected,” noted KYTC District 5 Chief District Engineer Matt Bullock.

“With the public’s help, we can focus transportation funds on needed community projects, prevent future theft and even save a life as the risk of electrocution while stealing is high,” he said.