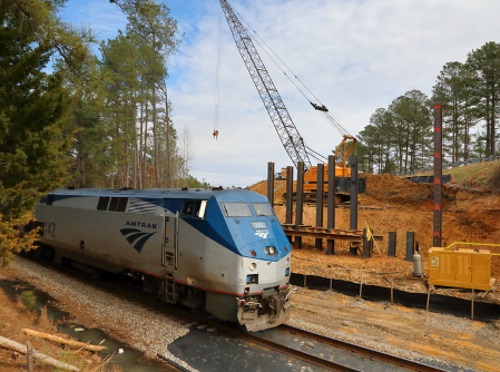 The American Association of State Highway and Transportation Officials recently provided the Federal Railroad Administration with feedback regarding the agency’s request for information published mid-August in the Federal Register regarding the Interstate Rail Compacts or IRC program.

AASHTO noted in a letter to FRA that the IRC program is an “important funding tool” for supporting interstate passenger rail investments. AASHTO said states currently in IRCs could provide the most “nuanced” information on the funding uses and needs, such as Southern Rail Commission, the Midwest Interstate Passenger Rail Commission, and the Virginia-North Carolina Interstate High-Speed Rail Compact’s Southeast Corridor Commission.

“Open and strong communication between state departments of transportation, Amtrak, and FRA will be crucial to refining the future guidance and technical assistance as FRA develops this new [IRC] program,” the organization stressed.

AASHTO emphasized that one of the benefits of IRCs is that they are “tailored contracts,” designed to meet the needs of the states who jointly enter the agreement.

“As such, any compact deliverables or performance measures FRA seeks to establish may be most effective when set at the individual compact level, following close collaboration between FRA and the involved states,” the organization said. “High-level deliverables should be limited to grant performance reports, as additional requirements should be considered following case-by-case coordination.”

The key value provided by IRCs is the “elevation” of rail program coordination among states, AASHTO said.

“The coordination between states on intercity and cross-state passenger rail services can help states address connectivity and congestion inefficiencies and support grant application processes,” the group noted in its letter.

“However, state DOTs not currently in compacts may face concerns regarding the ways that IRCs interact with state DOT authority to manage state rail systems,” AASHTO said.

The IRC issue ties into the overall and extensive involvement of state DOTs in passenger rail service – particularly in conjunction with Amtrak.

Those efforts reflect what Stephen Gardner, Amtrak president and CEO, referred to as efforts to “grow [passenger] corridors and create new opportunities for Amtrak-state collaboration” during a speech at AASHTO’s Council on Rail Transportation legislative meeting on in Washington, D.C., in February.